Response: Exhaust Honour Guard to cancel the first point of damage just dealt to a character.

Valour Response: Exhaust and discard Honour Guard to cancel up to 5 damage just dealt to a character.

The Wastes of Eriador #4. Tactics. 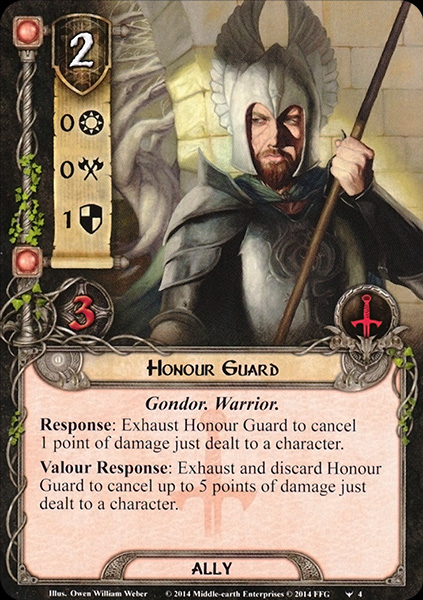 My card review of Gondorian Discipline was mostly just an argument for the positives of damage cancellation - in brief, while it may be less cost-effective than healing, it's a option while healing is almost entirely in , and the thing damage cancellation can do which healing can't is actually save a character from something which would otherwise kill them outright. Particular examples are unexpectedly powerful attacks which could kill heroes; shadow effects which deal direct damage to the defending character, potentially killing chump-blockers and leaving the attack undefended; and added security when deliberately taking attacks undefended.

All those points apply even more to the Honour Guard, who is the gold standard in damage cancellation the same way the Warden of Healing is for healing. Barring ally readying he can cancel 1 point of damage per round, but 1 damage every round stacks up into something fairly significant pretty quickly, and for a lot of emergency cases 1 is all you need. If you're being careful how you defend, it's rare that a nasty shadow effect will kill your defender by more than 1, and direct damage shadow effects for more than 1 damage are almost unheard of. Another fantastic use of the Honour Guard is in the event of effects which deal damage to all characters, all allies, all exhausted characters, whatever, he can exhaust to save perhaps a 1HP questing ally when you need to hold onto your willpower, or very significantly he can exhaust to save a Warden of Healing who can then heal the damage from all the other characters. Or maybe you want to save an Imladris Stargazer or a Zigil Miner, or a Master of the Forge, or some other utility ally. The biggest advantages of the Honour Guard over all other forms of damage cancellation is firstly that he's repeatable and secondly the absolute flexibility he offers - Gondorian Discipline only works for Gondor characters, Close Call only for heroes, and Raven-winged Helm only for Sentinel heroes, but the Honour Guard can cancel damage to any character. A further benefit he offers in helping you deal with potentially mounting damage is that he has 3 hit points himself and so in addition to cancelling damage on other characters he can safely soak up a couple of points as well.

All this is merely considering the basic Response, which is the bread and butter of this ally, but the Valour Response is a significant strategic resource to bear in mind as well. Obviously while the standard Response is just for every day keeping things going smoothly the Valour Response tends to be for big make or break moments and it works fantastically for those. If you find yourself deliberately or inadvertently at or above 40 threat, using that Valour Response could let you completely shrug off an undefended attack even from a fairly powerful enemy, or safely take a hit from an even more powerful one. It's perfect for carrying you through a boss fight which might otherwise kill you. Obviously given how good the Honour Guard is you shouldn't be too gung ho about discarding him, but 5 damage cancelled all at once is a lot and of course you can spot the moments where cancelling that damage will allow you to win much easier, or indeed where not cancelling it will cause you to lose. The power of that Valour Response to turn around and reshape a Combat phase is such that if you are in Valour, the Honour Guard is a fantastic choice of ally to put into play using Sneak Attack or Prince Imrahil.

One additional point to bear in mind (pun not intended) is that since the Honour Guard targets and cancels the damage, not the character it was dealt to, he pairs up fantastically with hero Beorn, in a clear case where damage cancellation is superior to healing. He works likewise with any objective allies who may also be immune to player card effects so you can't heal them - Chief Turch, or the ships in Sailing quests, for example. Since those objective allies will cause you to lose the game if they're destroyed, having the Honour Guard there to help keep them in good condition is a definite positive.

For all these reasons, I feel that Honour Guard is an absolute staple of decks, always worth putting in unless you have a really good reason not to. Damage cancellation is a very powerful ability to have, and the Honour Guard is the best at it.