"I am the Doorward of Théoden," he said. "Háma is my name." The Two Towers
Sara Betsy

The Treason of Saruman #7. Spirit. 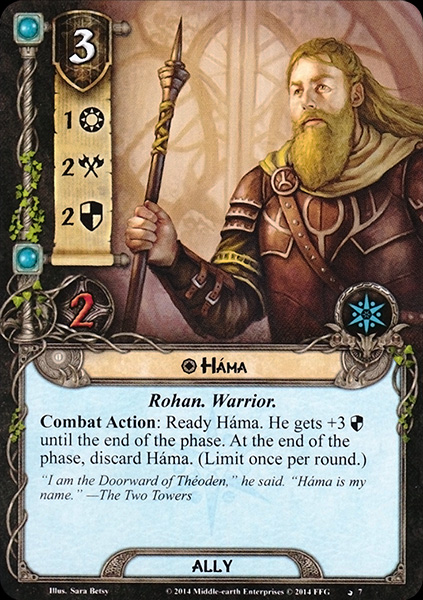 As a big fan of in-built readying, Hama is one of my favorite allies. He's a mite pricey for being a "do X then discard" ally, but running him with Théoden makes the resource hit more manageable. But even outside of a dedicated Rohan deck, I find myself splashing him into most decks I build. His excellent combat stats mean that even if you aren't utilizing the Rohan discard synergy, he still pulls his weight. In particular, his ability makes him incredibly versatile. Block a weenie, ready him and block a big bad--or have him hit back with his nice 2 attack. Have him chip in on questing, then pop him up for duty during combat. The defense boost is actually very useful despite him being discarded at the end of the combat phase, as there are now so many enemies and shadow cards that punish chump blocking. A mighty ally indeed!

MrObsolete 46
Note that you can trigger an action after exhausting to defend but before calculating attack damage, so he can actually defend both attacks with 5 defense. I'd say that's absolutely worth it. — frozen 60 6/6/21
Excellent point. Makes him even better! — MrObsolete 46 6/7/21