While there is a side quest in the victory display, Vigilant Dúnadan does not exhaust to defend.

"I don't think we've rightly understood till now what they did for us."
Barliman Butterbur, The Return of the King
JB Casacop

The Sands of Harad #6. Tactics. 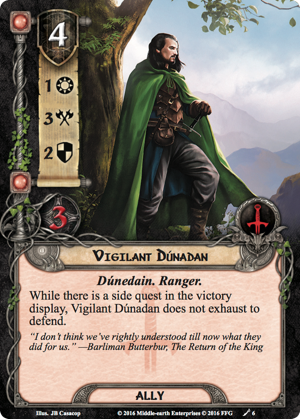 I have a soft spot for cards that are relatively niche but if set up right can be over the top. Vigilant Dunedain falls right into this category. At first glance he looks like an expensive ally that has some situational use, but definitely not an auto include. Four resources feels about right for his stats and ability, but at the same time can be seen as a bit of a turn-off, as Tactics resources are in high demand. In addition, his ability seems handy, but not great. With only 2 defense and 3 hit points, a premature death feels likely to appear on the horizon. After all, it will only be so long before the inevitable shadow card or boss enemy does away with him. Finally, the requirement of a completed side quest can also be tricky for tactics, a sphere that is weak on willpower. All of these things make this card one that requires a bit of deck building to bring to his full potential.

Let’s start with the side quest requirement. Tactics has been willpower deficient from time out of mind, so at this point you should know how to build a deck that makes up for that. It will still be a bit harder, because you’ll probably want two Tactics heroes with the Dunedain, but it is still entirely possible. As far as which side quest to include in your deck, the obvious choice here is Keep Watch. It will not only get the Vigilant Dunedain’s ability up and running, but gives all enemies negative one attack. This essentially allows him to defend enemies with a printed attack of up to 3. On a side note, since you’ll need more than one side quest in the deck, another good one to include is Gather Information, which will allow you to pull up Keep Watch.

So far the Dunedain can defend attacks of up to 3, which is serviceable, but his life expectancy is still relatively short. In addition, you’ll still need other defenders to handle a boss enemy when it shows up. So, include Honor Guard. With one on the table, insurance is provided against shadow damage, and with more than the one, the Dunedain takes on the status of a boss defender. Now, there are limited ways to boost defensive stats on this particular card, because it does not have the warrior trait. However, one might consider Mighty Warrior and Raiment of War as a feasible combination. The benefits defensively are in my opinion worth the three resources. In addition, his attack value gets boosted as well, making him a monster in all aspects of the combat phase.

Now at this point, you’ll have spent around ten tactics resources on the Vigilant Dunedain, which is . . . a lot! Is setting up this card worth that much? The answer, in my opinion, is a resounding yes. With all of this set up, the Dunedain will almost single handedly be able to handle your combat. Think of it! He can defend unlimited enemies, and then be up and ready to assist other attackers, or sometimes even take one down all by himself. Moreover, because of the setup required, you will not have to be play him right away, allowing you to save up for him. Now in a quest that punches you in the mouth right off the bat, the Vigilant Dunedain will be trickier to handle. But if you’re looking for a card that can have a deck built around it, give the man a shot!

Here are some ideas I’ve got for boosting this Vigilant Dúnadan:

Tale of Tinúviel with Arwen Undómiel can boost his AND by three. Also, as noted by @Emmental below, you can pull more shenanigans with two Spare Hood and Cloak, passing them between these two allies for more boosts.

Boost : consider using Spear of the Citadel to make him a killing machine (thanks @Emmental!), Warrior Sword since you'll likely be engaging a bunch, or the aforementioned Narya.

Boost everything with Outlands: In Service of the Steward + Sword of Morthond + these Outlands allies.

I always thought about this card as a fun gimmick card, but he can be incredible in a Dúnedain deck, although for some reason I never considered him in this context. Go with Thurindir as one of your heroes, grab Send for Aid, quest hard, get your Vigilant friend out (even without a Tactics hero) and start defending everything. Wild Stallion and Arwen Undómiel are really helpful for him, and an Ent Draught doesn’t do harm, either. He will allow you to stay engaged with a LOT of enemies, giving you all the Dúnedain boosts you need. I started using him now, and once he is out, combat is no longer an issue!