Action: Discard Damrod from play to lower your threat by 1 for each enemy in the staging area. 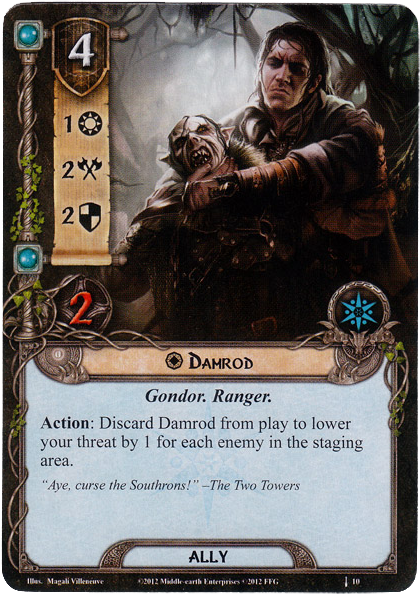 Not a bad card in trap decks. But he is pretty costly for only having 2 hit points, IMO. A good target to Sneak Attack in then discard for the threat reduction, though. Also combos well with Prince Imrahil or any card that grants bonuses when characters leave play.

eddyvan 27
Yeah, he would have been a bit better if priced at 3 or by having higher stats, but it was still an early design. I think it might be best used by being put in play with Tactics Imrahil effect, used in same way in combat (small defense, attacking) and then discarded for its own effect. — Alonewolf87 1506 10/20/20
Lothiriel has given him a new lease on life — Quetzal513 67 2/26/21