Event. Cost: 2.
This card was errata'd

Action: Until the end of the phase, if the current quest does not have Siege, it gains Battle. 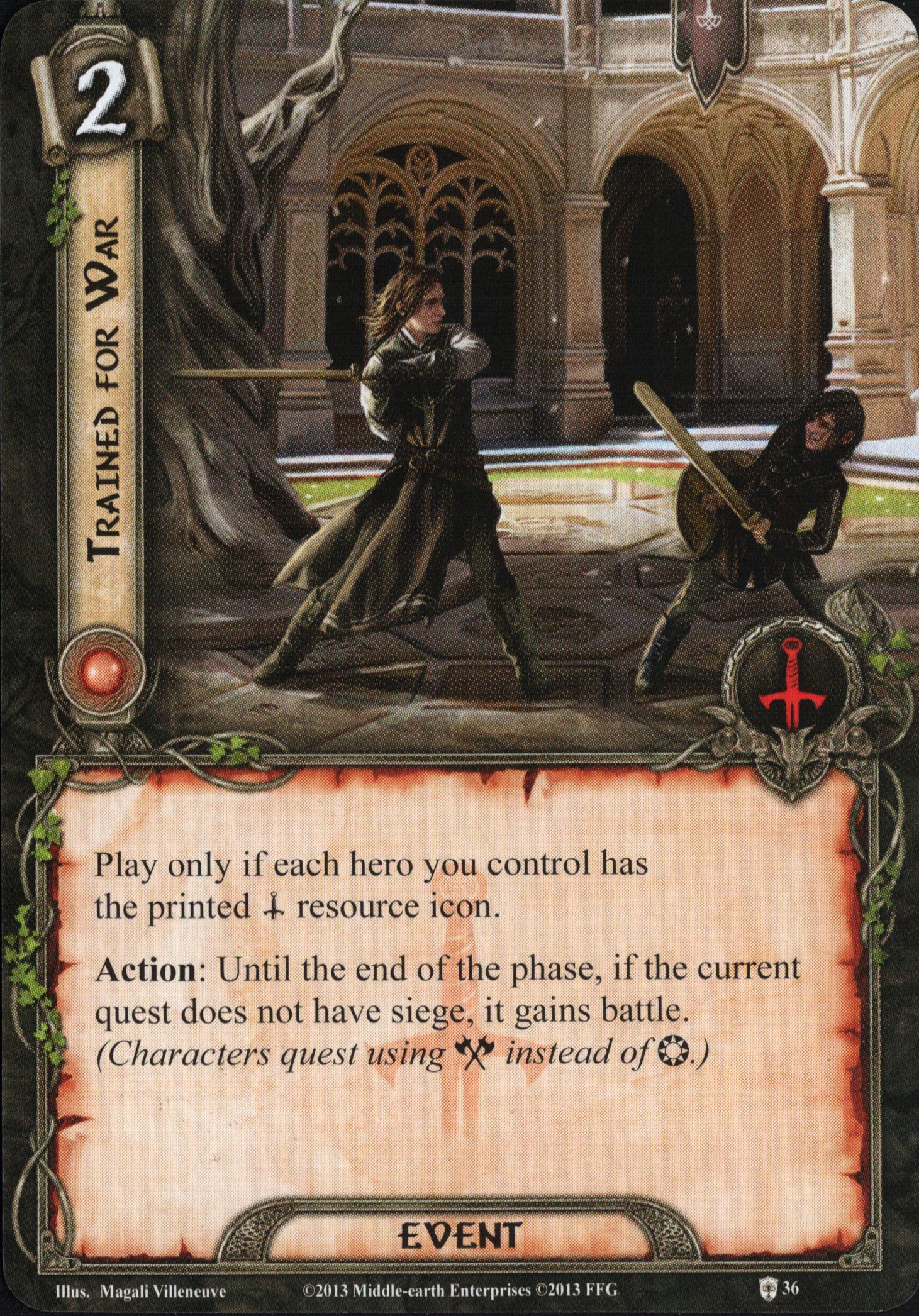 This card, in my opinion, has the best artwork in the entire game. Period. In it, we likely see a teenage Boromir teaching his younger brother Faramir how to use a sword and shield, while Denethor watches his two sons from the shadows of the courtyard, which is beautiful itself, with the White Tree and several rooms and alleys behind it. If you want a slightly bigger/clearer version of the art, go here: 1.bp.blogspot.com Magali really outdid herself in this piece.

As for the card itself, it is mainly ignored because it generally needs to be built around in a deck (or maybe even two decks). However, in the right context, this card can shine and make for a very effective strategy. I have three copies in most of my mono-Tactics builds since it lets them get a big quest push through end-game. And also to look at the art. Which is pure awesome.

Trained for War has many of the same problems as its counterpart, Against the Shadow. That is, it's an overly expensive one-shot to do something which you need to do consistently all game, the blanket nature of the effect blocks characters who were good under the usual status quo, and in general it was a misguided attempt to support a mono-sphere archetype by making it do something it wasn't designed for instead of giving it cards which were designed for that purpose. Just as 's defensive capabilities were helped much more by Beregond than Against the Shadow, 's questing ability was helped much more by Éowyn than Trained for War. At this point I could just direct you to read my Against the Shadow review and apply the same principles to the failings of this card, but in the cause of thoroughness, I'll go over some of the details.

Once again I have a sidenote, this one perhaps more applicable, that in certain quests this card becomes more useful. Peril in Pelargir has 2 stages of Battle but finishes with questing, so there Trained for War can allow you to just disregard entirely and Battle quest all the way, making for a more focused setup. And there could also be potential in Into Ithilien, in that you could keep Celador alive and go to stage 3 without needing (so long as you make sure your threat is at least 37 when you arrive at stage 4, but that's generally hard to avoid in my experience). Perhaps you could also apply it to Blood of Gondor for the period in between exploring The Crossroads and advancing to stage 2 to dump there as well. Turning our eye to more general applications however, this card has problems.

So the blanket nature of the effect is again a problem. Turning the quest into a Battle is great for the high deck, but anyone who brought a regular questing deck will have issues as all their is no longer relevant ("Unless they use it to defend with Against the Shadow," I hear you cry. I'm not going to dignify that with a response). And aside from the specific cases mentioned above, someone will have to be bringing a regular questing deck, because Trained for War is of course just a one-shot effect as an event, and you need to quest every round, so the rest of the time you'll have to get through with . Or continually recycle Trained for War with Háma, but that in turn will require some very specific deckbuilding.

I will say this for Trained for War - might be the easiest of the three stats to amass large amounts of, one way or another. Until you're established though, you're probably not going to have enough available to use it for questing and combat in the same round, whcih brings us once again to the problem where you're jumping through hoops and spending 2 of your 3 resources per round to be allowed to use characters for a purpose for which they were not intended, instead of saving the resources and slots in your deck and leaving questing to the characters who were designed for it.

Once again there are comparisons to be drawn to more recent cards, in this case Delay the Enemy and Grappling Hook. Delay the Enemy is generally agreed to be the worst of the Angmar Awakened side-quests, but at least it being a Battle makes some sense - you won't have those high characters available for combat since they quested, but you won't need them so much because everyone just discarded an enemy. Grappling Hook meanwhile is the single character option, so in most cases it won't allow for such a massive quest push, but it also has the advantage of being usable after staging to correct your questing strength, and when you know with much more confidence whether or not you'll need that character in combat.

Trained for War is not as bad as Against the Shadow, but that's a pretty low bar to clear. It might be useful in some mono- decks now, where usually they could quest with Théoden and Éowyn and maybe their third hero as well, relying on allies to take care of combat, and then late in the game play Trained for War to let their allies all pitch in and blow up a quest stage. It's still very niche though, and at the time of release, it did almost nothing to support the archetype it was designed for.