Children of the Sea

"For deep in the hears of all my kindred lies the sea-longing, which it is perilous to stir"
Legolas, The Return of the King
Mark Winters 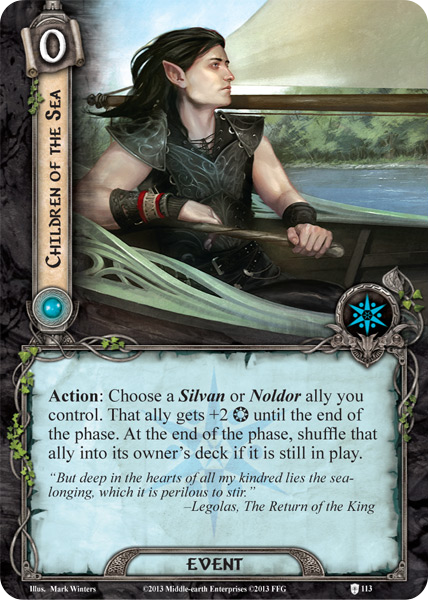 Children of the Sea is a card that I thing is highly underrated. I shall attempt to go over its merits. For one thing, it is free. This is huge! A +2 willpower boost for free? I don't believe this is an effect on any other card. Another hugely important thing is that it can work decently with Silvan. You can use this card, and at the end of the phase the ally is shuffled in to your deck. Then, if you have another ally out, you can play The Tree People and try to get the ally you shuffled back in out again. This is especially nice because it improves deck consistency. If you are running three copies of the ally you target with Children of the Sea, you will essentially add another copy to your deck at the end of the phase. It is important to note though that this does not only work with Silvan. A Noldor deck can benefit pretty heartily as well. Let's say you are running a Noldor deck with lots of card draw, and your deck is fairly small at the end of a few turns. You can play this card, and because your deck is dwindling in size pretty quickly, there is a good chance you will draw said ally again soon.

When this card is looked at in these lights, it suddenly does not seem so bad. Yes, the cases I described are niche, but it is good in those contexts. I do not believe a card is truly awful if it can be used to good effect in at least a few cases. This is one such card. Although it is not for every deck, in a few cases this card is amazing. I challenge everyone to try this card in one of the decks I mentioned.