Action: Exhaust Anborn to return 1 Trap card from your discard pile to your hand.

"I sent my keenest huntsmen to seek him, but he slipped them, and they had no sight of him till now, save Anborn."
Faramir, The Two Towers
Ilich Henriquez 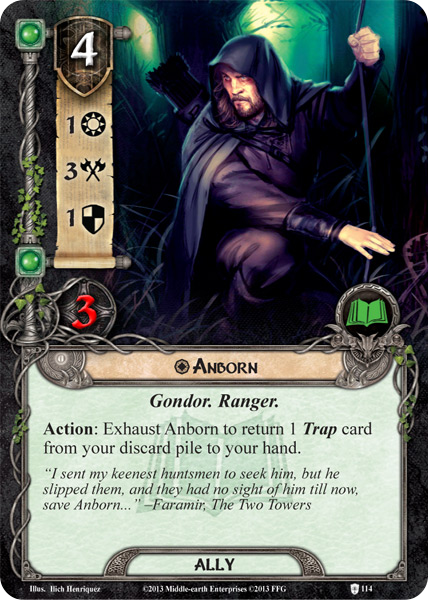 Quite costly ally but 3 is quite good in Lore and its Trap cycling effect can be amazing in the right deck, so unless you are not using his Leadership counterpart Anborn I would say it can be a good addition to a mono-Lore trap deck, to support the Erebor Hammersmith work or attack when needed.

In many instances I don't think the value is there for poor Anborn because of his cost and limited utility.

The 4 resource feels steep for his statline; when you need to return traps to your hand, you don't get to use his substantial attack stat. For the same cost you could get someone like Haldir of Lórien and have the flexibility to attack, quest, or defend well, especially with ranged/sentinel which are valuable as a mono deck will not always be receiving the brunt of monsters. And I say mono because playing Anborn in a deck with two heroes or fewer is locking up some resources (or resource generation) for a couple rounds for little payoff.

His ability also makes it hard to justify playing him. When playing with Damrod it behooves a player to have a variety of traps in their deck to increase the chances of drawing a trap and taking advantage of his card draw ability... But if you have a variety of traps, you don't need Anborn to recycle them because you'll be drawing more. None of the traps are really worth recycling; if you're using Forest Snare you don't need to attack the monster it's attached to, so it doesn't even make it into the discard pile. Recycling Entangling Nets makes the most sense because a monster that lands on it is easier to kill and is toast eventually; but does reusing that trap justify an action that could be used to swing for 3? Even if you're not using Damrod when playing a trap deck, you still run into a resource bottleneck to play full-cost traps and lay down a 4 cost ally in the form of Anborn.

Compare Anborn to someone like Firyal who has an ability that is triggered when you quest with him, which is probable given the impressive questing stat. Or for attacking, consider Eryn Galen Settler who costs 2, swings for 2, and can get rid of a pesky location in a pinch and reduce threat. The Ents are a bit different because you need to wait but Quickbeam and Wandering Ent are cheap, durable, and flexible, though require a bit of planning. Either way, there's better options than Anborn. Which is a shame because the art on this card is great.