Reduce the cost of the first Trap card you play each round by 1 (to a minimum of 0).

Response: After a Trap card you control is attached to an enemy, draw 1 card.

"See! Some of the Southrons have broken from the trap and are flying from the road." The Two Towers
Joshua Cairós 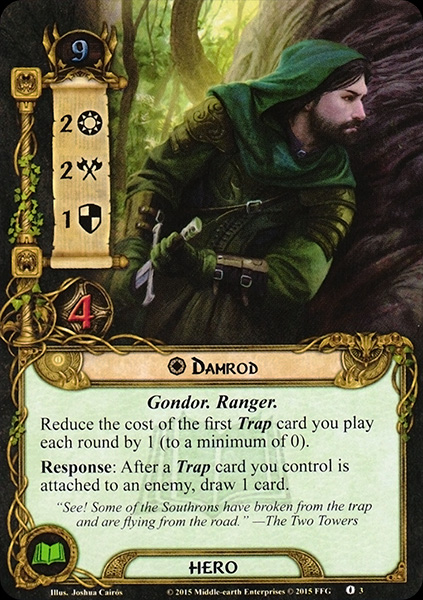 Damrod is a relatively recent addition to the Ithilien Ranger/Trap archetype, but has instantly become an auto include in it, as well as any other deck that uses traps.

Damrod helps alleviate both with his abilities. Making traps cheaper (cheap-as-free with Master of Lore [Yes, I still like him, nerfs and all]) makes you more willing to spend your valuable Resources on fiddly control-cards, and the card draw solves the deck-slots issue.

My only worry about this amazing card is that now all future traps will have to be balanced around him, and I fear that they will be over-costed (more than current traps are) to compensate for Damrod's ability.

Damrod is a spectacular hero who fixes some of the biggest problems with the trap deck. Traps is a more casual deck, but now it looks like it could be competitive, depending on the quest, because with damrod, traps are cheaper, and whenever one attaches, you get to replace that card in your hand! Imagine playing a Ranger Spikes and a Poisoned Stakes on turn one and catching a nasty enemy you wouldn't be able to deal with that early on. Not only that, but you get two cards out of it. I know traps is a bit of a gamble on hitting a good enemy that you don't want to deal with, or a bad enemy that doesn't need to be trapped, like a suspicious crow from the hobbit saga box. Damrod makes that gamble a lot nicer if you hit the wrong enemy, because you get anew card to replace the trap, that could ease the situation. Damrod is a wonderful addition to the trap archetype, and his stats and cost aren't that bad themselves. Also, note it is only the first trap you play is cheaper by 1, but that isn't really a downside, because you really only need to play one trap a turn, except some that combo with each other, hence the Ranger Spikes and Poisoned Stakes example earlier. Great Card and a good addition to lore! Side note: those traits aren't exactly a downside either, both have good benefits

SamthemanGamgee 462
It's too bad he doesn't have the text, &quot;when play a trap card, Damrod gets the other spheres&quot; — kidohearts 1 11/23/19