Attached hero gets +2 and collects an additional resource during the resource phase.

...the necklace of Girion, Lord of Dale, made of five hundred emeralds green as grass, which he gave for the arming of his eldest son…
The Hobbit
Drazenka Kimpel

The Wilds of Rhovanion #11. Neutral. 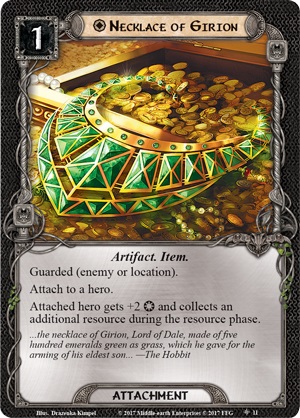 As many Guarded attachments this has a very good effect once you control it but it can be difficult to manage depending on which card ends up guarding it. Still a worthy inclusion in many decks since it's neutral and I think it partners up really well with Éomer.

These guarded cards can be phenomenally powerful, but can come with game wrecking effects if the wrong encounter card is triggered by them. I recommend using either scrying effects to mitigate the risks and/or traps. Its hilarious, for example, when you scry with Henemarth Riversong and discover a 2 threat enemy is coming, and so play Ranger Spikes and then Necklace of Girion to trap the enemy and grab up the treasure with little fuss.

Mad Morderan 105
Using Ranger Spikes on an enemy you will then (most likely, unless you are playing a direct damage or staging area attack deck) engage and kill seems a bit of a waste. — Alonewolf87 1422 6/13/21
He never said he want to engage. You're the one who tell that. You put your words in his mouth. — perseflamme 47 6/13/21
The thing is, an enemy guarding a card needs to be killed to get the guarded card, and most often this is done by engaging and then killing it. Now, the Ranger Spikes are only good if the enemy remains in the staging area, but then you cannot get the guarded card you want; Maybe Poisoned Stakes is the better option (or a combination of bot traps) to have the enemy killed in the staging area, but that would be quite an investment of time and resources just to get that guarded attachment. — Taudir 214 6/14/21
@perseflamme if you keep the enemy with the Necklace of Girion in the staging area with the Ranger Spikes attached you cant &quot;grab up the treasure with little fuss&quot;. I am not putting words in anyone's mouth, I am simply pointing out something that stands out for me in the review. — Alonewolf87 1422 6/14/21
4

This is a card I was initially very high on: Celebrían's Stone and Resourceful combined into one card is something that I'm sure few players would pass up. However after having included it in some of my decks for a while now, I have come to the conclusion that more often than not it isn't worth it, sadly. I think a lot of that is because of the stages in the game in which this card is most useful. As for the first effect, boosts are pretty much welcome at any point in the game, whether it's to give your questing a boost in the beginning while you're still trying to get your board together, or to help you power through to the finish line as the staging area starts to get more clogged with obstacles. But it's the second effect that I think poses some problems. Obviously additional resources are always beneficial, but the more the game progresses the more that additional resource starts to lose its impact as your heroes tend to be swimming in more resources than you know what to do with. At that point the second effect might as well not even exist, and if you're not able to make good use of both of this card's effects, then it's basically a worse version of Celebrían's Stone. Yes the stone costs 1 more and is restricted to , but it's worth it to not have to deal with an additional encounter card.

As a result this is a card that you'd really prefer to play early on in the game, but its very nature as a guarded card puts it at odds with that. At the beginning of the game you often simply can't afford to add more encounter cards to the staging area, forcing you to hold on to it for a more opportune moment. And of course the longer you hold on to it the less value it will bring when you eventually can play it. I've even had times where I played it into an empty or nearly empty staging area confident that I could deal with whatever it brought out, and then more often than not found myself regretting that decision. Like the top review mentions scrying can certainly be very helpful with these guarded cards, but that isn't something you may always have access to.

Long story short, this card has the potential to be powerful, but the scarce opportunities in which it can be played severely hamper its utility.