Response: After Dwalin attacks and destroys an Orc enemy, lower your threat by 2.

It was a dwarf with a blue beard tucked into a golden belt, and very bright eyes under his dark-green hood.
The Hobbit
Tony Foti 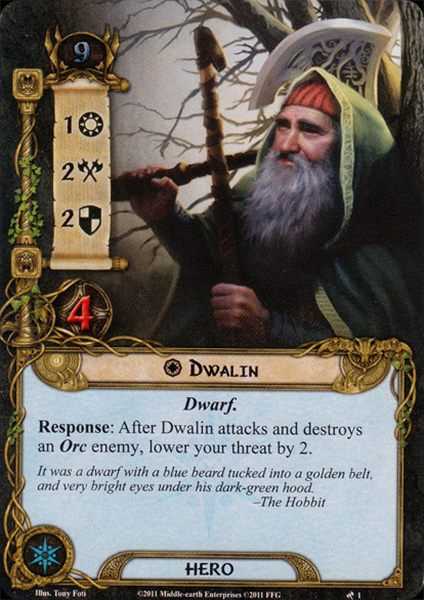 Dwalin gets overlooked a lot for the spirit dwarf spot because Nori fills the same role, but much more reliably. I doesn't help that there's a good ally Dwalin. I think he can still be quite good against some quests. he attacks for three with Dain, and can take advantage of Dwarven Axe and Dwarrowdelf Axe and Dagger of Westernesse is great synergy. I know, I know, one must include Tactics for those weapons, but, what sphere is really good at killing stuff? Tactics. Dwalin can help out them with threat reduction, one of Tactics weaknesses. So, if you're ever going to play an orc heavy quest, consider Dwalin.

Wandalf the Gizzard 1500
I do agree he is good in Orc heavy quests but I think the unpopularity spawns around that fact, that he is good in an Orc related quest. Other than that, his stats make him playable as a last pick in a campaign. Overall I think he is just to situational, and even in those Orc heavy quests he still isn't one of my first choices. It's a shame because they had a good idea, but I see him more as an objective ally or similar — SamthemanGamgee 436 2/18/18