Action: Discard the top 3 card of your deck to put Emery into play from your hand, under any player's control. Then, if any of the discarded cards have the , or sphere, discard Emery. 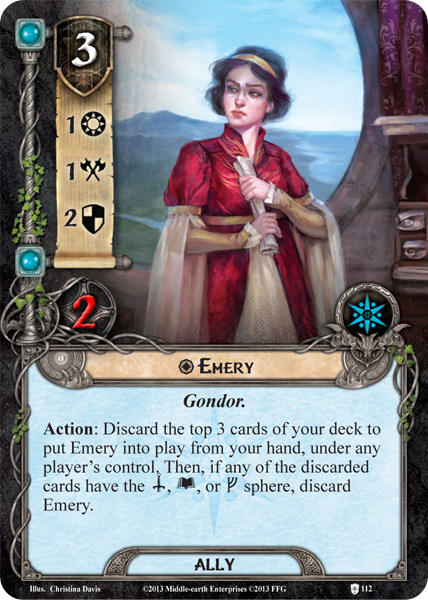 Weak stats for her cost, no seemingly helpful abilities, unique so you don't want to spam her. Emery doesn't have a lot going for her. But she does have one thing going. She is fantastic for Caldera decks to get the discard going. Dumping three cards into your discard will hopefully help get some more allies into the discard pile and you get a free ally at the end. Not a bad deal then, and probably why she came packaged with Caldera herself.

Christian_Medic 856
Well actually she has the right stats for her cost. Anyway she might also be useful in a mining deck and in a multiplayer setting if you have a mono Spirit deck having the freedom to put into play for almost no cost a character wherever it's more needed on the table has a great value I think (for example to avoid those pesky additional attacks from shadow effect which sometimes throw your plans out of the window) — Alonewolf87 1620 7/4/19
Your review is significantly under-rating her, I think. Firstly, she is basically free to play (if you think that the discarded cards is a cost, imagibe they were the bottom three cards of your deck- it only matters if you mill your entire deck). Secondly, as well as Caldara decks, she also sets up Noldor discard pile shenanigans. — Schrodingers Hat 44 8/24/19
You do really need the mojo-spirit which I find limits her, I think she has her place though just not as good to me as the Elven Jeweller of you want the free discard Ally. — Christian_Medic 856 8/24/19