Lindon Navigator does not exhaust to commit to a quest, and can commit to quests while exhausted.

Forced: After resolving a quest to which Lindon Navigator was committed, either discard it from play or discard 1 card from your hand. 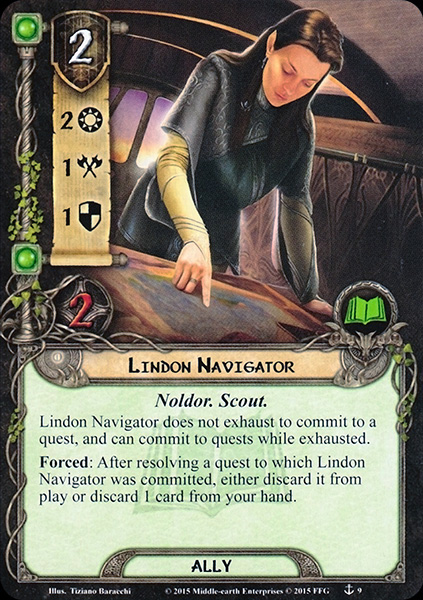 When I first opened The Grey Havens box, I was confused by this particular ally. Its stats to cost ratio is pretty favorable, while it has an interesting ability as well as a seemingly negative Forced effect. My initial knee jerk reaction was to dismiss this card as one of the bad ones. However, upon gaining some experience with it, I began to change my mind. To begin with, as well as being a solid quester, Lindon Navigator will have an extra action every turn. Coupled with the Scout trait, this gives one the freedom to play cards such as Distant Stars, Expert Trackers, or even use Mariner's Compass consistently. In addition, being able to quest while exhausted, though not as generally useful as not exhausting to quest, makes this card outstanding in edgy cases such as sailing quests. The downside to all this? After Lindon Navigator participates in a quest, you must discard a card from your hand. This seems to extremely limit the ally, and at times make it look downright bad. However, while its true that it can't be put into every deck, there are a few strong cases that stand out.

I am going to focus on two types of decks where Lindon Navigator can really shine. The first is of course a standard Noldor deck, or more specifically an Erestor deck. This is obvious, as the card was released in a box dedicated to that archtype. In a standard Noldor deck, having ways to dump cards like Elven Light or Lords of the Eldar is not just good to have, its necessary. Though there may be other ways to get the job done, Lindon Navigator is a cheap and easy way that provides a good return on investment of the discarded card. Now if multiple Navigators are in play, the burden of discarding multiple cards per round could become too heavy to sustain. However, in an Erestor deck, there will almost always be extra cards laying around. Lindon Navigator provides a prime target to make use of those otherwise wasted cards. Then, if one feels so inclined to play Lords of the Eldar, those already good questers will still be ready in the combat phase with solid enough stats to pull their weight. On top of all this, the Navigator allows one to set up other cards such as Mithlond Seawatcher or Warden of the Havens. Having the ability to discard whatever card type may be needed for that particular combat phase lends a variety of versatility which brings those allies to another level.