Response: After Ered Luin Miner is discarded from the top of your deck, put it into play under your control.

Tools were to be found in plenty that the miners and quarriers and builders of old had used; and at such work the dwarves were still very skilled.
The Hobbit
Lukasz Jaskolski

Temple of the Deceived #66. Neutral. 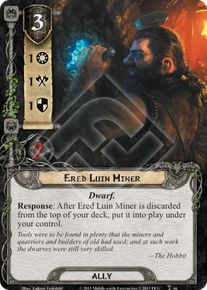 This is a really interesting card. Supports the dwarven mining strategy, but if you end up with him in your hand (and don't have a way to discard him for gain), then he's either a chump blocker or questing for 1, neither of which is worth 3 cost. I haven't decided if he's worth playing in a deck that's not totally based around him, or whether it's worth building a deck around him. But I'm interested in finding out.

estyles 19
He's cool with King under the mountain. — Lecitadin 166 10/2/16
Sure, and plenty of other Dwarf cards that discard off the top of the deck. I'm wondering though, if how good he is when discarded off the deck truly offsets how bad he when you draw him, and if that value justifies the inclusion of &quot;mining&quot; cards that you wouldn't otherwise use. My feeling is that yes, he is worth it, but I do hate when I draw them instead of something a bit more efficient. — estyles 19 10/5/16