Play only after the resolving enemy attacks step is complete.

"Helm is arisen and comes back to war. Helm for Théoden King!" Riders of Rohan, The Two Towers
Smirtouille

The Treason of Saruman #12. Spirit. 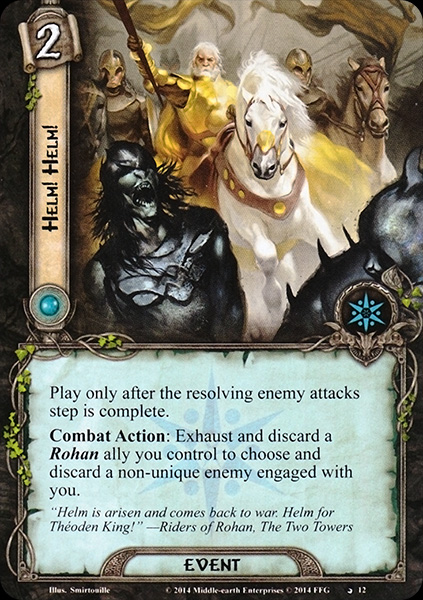 I've always wanted to love this card. It has very good potential but is loaded with costs and conditions. Don't get me wrong, Helm! Helm! is extremely powerful when you can meet all the conditions safely. Let's take a brief look at it.

The conditions: first you have a 2-cost event. This isn't too bad for an event that discards a potentially big and dangerous enemy. Okay, next you have to play it after any enemies attack. Then you have to exhaust a Rohan ally before discarding it. NOW you can discard that enemy. But not so fast! That enemy has to be non-unique.

The problem? You are probably better off just chumping an ally and ganging up on it with a loaded up Éomer. That way the big baddie you destroyed goes to the Victory Display versus the discard pile (assuming Victory keyword). By the time you get all your blocking done, if the enemy is that dangerous, you've probably already lost an ally anyway. Then you have to discard another one. Even if the defender lives you have to discard a separate ally as you have the exhausting condition. NOW you've lost two allies in one round over one enemy. This is not a good early game card in most decks even with the Rohan discard synergy.

Okay I don't really hate this card that much. Where I do think this card shines is against big (non-unique) enemies late game once you've established a board state and maybe you have (MotK) Gamling or Gúthwinë rolling. In other situations the sacrifices of this card are the clutch game-winners even without a way to retrieve discarded Rohan allies. Honestly, I used to rely on this card against Hill Trolls in my Journeys Along the Anduin until I became more creative. Luckily Helm! Helm! has gotten a boost in the new Children of the Eorl ALEP expansion. Now you can use Squire of the Mark to instantly get back a discarded ally. This makes Helm! Helm! much more viable and even more exciting to play.

One last thing to mention is that I can't help but to wonder if this card would have less conditions if it were desined later in the game. A somewhat comparable card is Hunting Party which benefitted from being released in the Haradrim cycle. Would Helm! Helm! have been a little easier to play if it had a similar mechanic? We'll never know but its interesting to think about.

Helm! Helm! should be viewed as a clutch card in scenarios with big enemies. Its very good in those decks. Early game is a no-go. Nevertheless it's still fun, and ever so rewarding, to discard big enemies! You just have to balance the cost.

Uruk-guy 499
Ironically the best enemies to use this card against are the various Mumaks, bypassing their &quot;cannot take more than X damage each round&quot; ability — Alonewolf87 1585 4/8/21
I absolutely agree. This card was amazing during Journey to the Cross-roads! — Uruk-guy 499 4/8/21