While you are engaged with an enemy with an engagement cost higher than your threat, the first Hobbit ally you play each round does not require a resource match.

Response: After a Hobbit ally enters play, it gets +2 until the end of the round.

The Mountain of Fire #4. Tactics. 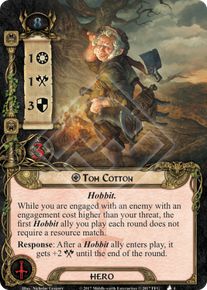 Tom is a very fun card to use. I had a blast messing around with him in a semi-combat based hobbit deck. He combos sooooooooooo well with Raise the Shire, espesially when used with one of the stronger hobbits like Farmer Maggot. His first ability allows you to play allies from any sphere(Yay we can always have Rosie Cotton) and his second one increases the of hobbit allies the turn they enter play. Not to mention he is an amazing low threat here that can defend very well.

Tom is a card I have never seen on the table except in my own deck (and even then I have only built one deck with him). He's an effective card but he's not popular. And not without reason. He hurts himself a bit.

-He's defensively oriented, which is a nice option, but he's also tactics, which is where Hobbits are most poorly represented. If he had a generally useful ability, this would be fine: he'd be a great low threat defensive option. However, his ability text is entirely dependent on having Hobbit allies in your deck.

-Half of his ability text focuses on making Hobbits combat-ready. Hobbits aren't generally included in a deck for combat ability due to poor combat stats. So what does this mean? Essentially, it means that any deck which effectively uses Tom will not be a "Hobbit deck with Tom," it'll have to be a "Tom deck," meaning without him the deck would fail to function. So that makes him a pretty niche choice. He will never be on the list of candidate heroes to take a hero slot in a deck. You'll either start the deck with him in mind, or he will not enter into serious consideration.

-His ability appears to be more useful if you are able to bounce Hobbits in an out of play, like Silvans. While this is certainly true, if you're building a deck with many Hobbit allies supported by his ability, you probably don't need to. You just keep playing new ones. There are some ways to bounce Hobbits (Raise the Shire, Gaffer Gamgee, Keen-Eyed Took), it's usually not something you will build your deck around. So, players might look at this and decide the card pool doesn't support his ability well. I think this one is mostly perception though, as a deck built around Tom is going to have plenty of Hobbit allies in all likelihood, and won't really need to take them out of play.

-He pushes you toward a combat-oriented deck and then demands that you keep your threat low. This is probably his biggest problem. If you're combat-oriented you might be a multiplayer deck (I haven't seen Tom in a well-rounded solo deck yet, although I think it can be done thanks to his resource-smoothing ability). If that's the case, you want to engage multiple enemies per round. With low threat, you really can't, without devoting deck space to abilities that let you do so. You also want to have Sentinel, have Ranged in your deck, none of which are easily achieved with Hobbits. You can do all of these things, but they cost you card slots.

All that said, I do like Tom and I think he has a lot going for him. In his favor:

-Opens up deckbuilding space that doesn't exist without him. Always a pro.

-His ability is pretty unique, resource smoothing only exists on a couple of hero cards. Even if your threat gets high, his +2 attack ability continues to function.

-Good defensive attachments exist for him (Ring Mail is expensive but great for Tom, Fast Hitch becomes very valuable on him, Staff of Lebethron...) so you can build him up very nicely. He can be supported by the in-trait Rosie.

-People will be interested and watch what you do when you bring him to a multiplayer deck, hah!

So, there is good reason for Tom to be unpopular, but it is not because he is a bad card. He's actually a very good card. He's just very niche at the moment.