Response: When you play an event, give it Doomed 1 to draw a card. You cannot trigger this ability if you have already triggered the ability of a Steward of Orthanc this round.

“...the power of Orthanc cannot be lightly thrown aside...” -Saruman, The Two Towers
Aleksander Karcz 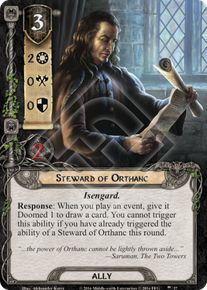 This is a card that works well in almost any deck, well... except attachment heavy or ally heavy decks. Most decks will have a mostly equal amount of allies, attachments, and events so chances are you'll be triggering his ability at least once every couple of rounds.

I think the cost is very much worth the ally. Even just for the 2 itself, three cost is not bad. Also, the fact that it is a neutral card is great because it is not limited to any one sphere of deck, but can be paid with any resource. That helps weaker questing decks a lot as it gives them a reliable quester.

Now the ability is what really makes this ally shine. The ability to draw cards outside of is incredible considering it can be difficult to find some in , , and , at time. True, the ability gives a doomed 1, but then you have the whole Gríma dilemma if you have a problem with that. You could also combo it with Keys of Orthanc, to provide resources. That would cover a lot of the problems in any deck. This card smoothes over two major problems in some decks, card draw and .

A great card that I have had a lot of success with, even in multiplayer.