While Elfhelm is ready, he gains:

"Response: After your threat is raised as the result of questing unsuccessfully, or by an encounter or quest card effect, reduce your threat by 1."

"Buy my lord sends word that we must set ourselves in readiness: orders may come for a sudden move." The Return of the King
Magali Villeneuve 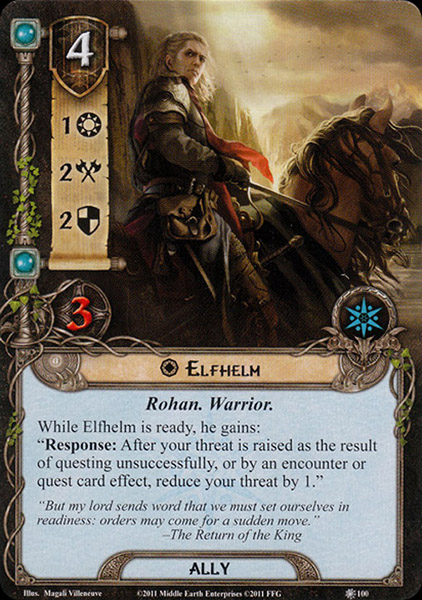 Elfhelm is a great ally. 4-cost obviously is on the steeper side but he's worth it. The stats are good, you get some reasonable flexibility out of him - 2 /3 is pretty good for an ally and is enough to let him take attacks from weak to average enemies fairly safely, while an extra 2 is always welcome, and isn't necessarily that easy to come by in the sphere. What really makes him stand out though is the ability.

Firstly I will quickly cover the limitations - Elfhelm doesn't cancel a threat raise, though it can feel like it, he merely lowers your threat again after it raises, so if the threat raise causes you to hit 50 you're out of luck. And Elfhelm only helps with threat raises from questing unsuccessfully and from encounter or quest card effects. So he won't lower your threat if you raise it with Frodo Baggins, or Boromir, or Gandalf, or any of the many Doomed player cards, or any other threat raising player card. That said, he still works well with those cards because if your deck strategy revolves around taking threat raises from your own cards you'd probably rather avoid additional threat raises from the encounter deck to give yourself more leeway. And of course the ability only applies while Elfhelm is ready - but that's not a big limitation since most threat raises come in the Quest phase and Elfhelm's stats make him much more a combat character. Saving him to attack rather than defend generally covers every threat raise the encounter deck could be throwing at you.

Now to the good parts. Questing unsuccessfully isn't something which should be happening too often, but perhaps in a context where you're trying to quest cautiously to limit how much progress you make while setting up a board-state, Elfhelm could help correct for a miscalculation. The big thing though is encounter and quest card threat raises. Any Doomed 1 from the encounter deck essentially no longer affects you. Higher amounts of Doomed are lessened. You mitigate locations raising your threat to travel or when they're explored, enemies raising your threat by attacking or by dealing damage, treacheries and quest cards raising your threat based on any number of criteria. A search on Hall of Beorn for encounter cards with Doomed in the text produces 95 results, one for "raise each player's threat" produces 60, "raise your threat" 40, and I'm sure there are other phrasings. Remember of course that shadow effects are also encounter card effects, so Elfhelm can mitigate a threat raise from a shadow effect as well as long as he's still ready. For an extreme example, consider the location Market Square from Murder at the Prancing Pony (possibly the best Elfhelm quest as it's full of threat raises). The Market Square has "Forced: After a player places any amount of progress on a location in the staging area, he raises his threat by 1." Which is a problem since location control can be significant, but the way it's phrased, it's a separate threat raise of 1 for each different location, so if you trigger a Northern Tracker with Elfhelm ready, you place 1 progress on each location, and thus for each location you raise your threat by 1 for the Market Square and then reduce it by 1 again for Elfhelm, completely negating what can otherwise be a hugely punishing effect.

A simple comparison can be made between Elfhelm and The Galadhrim's Greeting. Greeting reduces your threat by 6 and costs one less resource to play, but it doesn't have stats. Elfhelm's stats are worth a significant chunk of his cost, at which point we conclude we're paying less for his threat reduction than we are for that of a Greeting - but depending on the quest, Elfhelm may actually reduce your threat by more than 6 in the long run, making him an absolute bargain even without potentially using Théoden to get him in for 3 instead of 4 (or Caldara to bring him in free from the discard pile). He doesn't synergise with the whole Rohan discard-from-play mechanic, but when you're discarding a bunch of allies, it's good to have some strong ones who are actually sticking around - and synergy or no synergy, that ability is amazing in pretty much any deck. As one more possible idea, I'd say Elfhelm could fit in alright in a deck wanting to make use of Valour effects - such a deck would want to reach 40 threat to activate Valour, but then wants to keep its threat under tight control once it's there, and Elfhelm is great for that.

Elfhelm is one of the gems of the first cycle, with an ability granting some of the most powerful threat reduction in the game if you get him into play early enough to take full advantage of it, making him a stand-out pick for many quests, and pretty much never a bad choice.