Quest Action: Spend 1 resource to put Bofur into play from your hand, exhausted and committed to a quest. If you quest successfully this phase and Bofur is still in play, return him to your hand.

"Get up lazy-bones..." The Hobbit
Ilich Henriquez 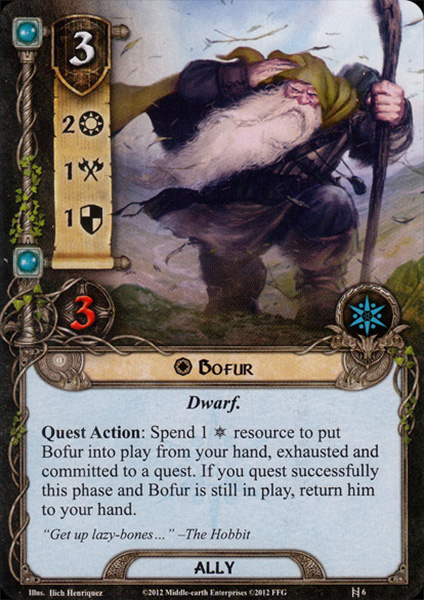 Bofur is a good ally with a very clutch ability. Three resources for two willpower isn't bad, especially with a whopping three health. He's even better in a dwarf deck, but still stellar outside of one. His ability comes in very handy in the early rounds of the game where you're more likely to quest unsuccessfully and need the cheap willpower. He could just be used as a sneak attack whenever you happen to need a spot more willpower. For that reason I think he's a good candidate for almost every deck with spirit. of course there is a tactics Bofur ally, which could provide uniqueness conflicts in multiplayer, but I think that detracts nothing from this one's power.

Bofur is deceptively simple looking; spend a resource during the quest phase for 2 additional and, if you quest successfully, return him to hand. Viewed in this way, Bofur looks very similar to Courage Awakened, in that he almost functions as an event that never stays in play longer than a phase unless you don't quest successfully. But this cloak of simplicity hides quite possibly one of the most intricate cards in the game, one that, with a bit of thought, can give you a lot of bang for your buck.

First, there's the obvious "quest unsuccessfully with Bofur so he stays in play." And, on paper, this is a good move; spending 1 resource for 2 is very efficient, and 3 on top of that is amazing. But I'd argue this is getting rid of two of Bofur's greatest strengths; his flexibility and his continuous returning to hand.

First, his flexibility. Because he's a quest action, you can play Bofur for 2 more on the quest during almost any action window in the quest phase, meaning you can either hold him back until after staging to decide exactly how much you want to commit or commit him prior to staging, preferably if you know already that you're going to succeed, to mitigate an encounter card. For example, if you know that the top card of the encounter deck is the Dol Guldur Orcs, you can commit Bofur at the start of the quest phase and have him absorb the damage. At the worst, then, you traded 1 resource for canceling two points of damage and 2 in the staging area. Not shabby.

But then this ties in to his second great strength, which is that, at the end of the phase, if you quest successfully, Bofur returns to your hand. Following revealing the Dol Guldur Orcs (Dorcs), you quest successfully, at which point you bounce Bofur back to your hand, fully healing him the next time he enters play. So long as you don't destroy Bofur during the quest phase, you can effectively pay 1 resource every turn for 2 and 2 cancelled damage. If you were to use Bofur's ability every quest phase for 3 turns and deal 2 damage to him every quest phase by encounter card effects, he would effectively be a 3 cost ally with 2 and 7 .

AlasForCeleborn 510
But this calculation only works if you get delt Dol goldur Orcs every round, isn´t it? — chessplayer 14 3/26/22