Attached hero gets +1 for each resource token on another copy of Keeping Count that is above the current number of resource tokens on this card.

Forced: After attached hero attacks and destroys an enemy, place 1 resource token on this card. 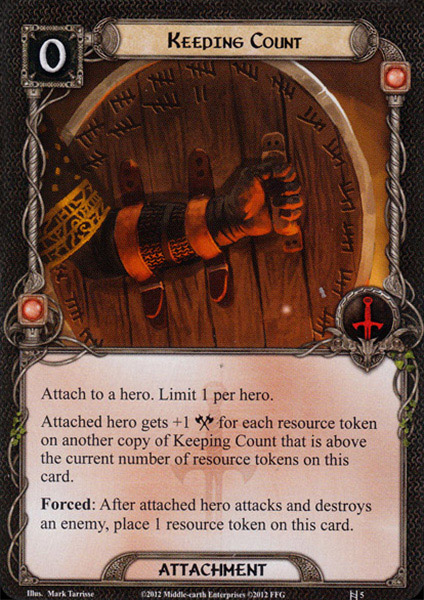 Designed squarely for fans of the source material, but infamously bad. Making this useful requires drawing two copies of it; drawing one of them EARLY, like first or second turn; and encountering enough easy enemies to boost it decently. It also makes itself worse once you start actually using its bonus, unless the characters always attack together. However, it might not be as bad as perceived, because you're not required to attach them both at once. It might be viable if you have good card draw and a main attacker - say Legolas, who wants to kill something every turn - and include three of this hoping to get one in your opening hand. At some point you draw into more copies, and you can just attach them when needed to make temporary boss slayers out of other heroes. There's surely more reliable ways to get attack boosts, but it is free, after all...

NoSoup4you 731
I was playing through Angmar Awakened cycle, put this on #Elladan on any quest with the Cursed Dead encounter set, racked up tons of tokens. Then near the end of those quests you're frequently facing Thaurdir who needs a wallop or two. Second copy of Keeping Count comes out near the end and gives another hero (or two) +7 attack for the boss showdown. Made me wonder why Id not played it before, but an #Erestor deck, where nearly everything was free, really facilitated it. — Quetzal513 70 2/25/20
4

Less a review and more an amusing realization: there's no "Limit 2 copies of Keeping Count in play" like there is on Friend of Friends, meaning that you could potentially get out 3 to 12 (in a 4 player game) Keeping Counts if you manage to draw into all of them.

Now, there is a legitimate question in here; why in Arda would you ever want to play any copies of Keeping Count, let alone 3 or more? The short answer is you don't, competitively speaking: Keeping Count's slow to get set up, it requires you to draw into 2 copies to have any effect, making sure the resource ratio on the two copies is good (holding one hero back from combat to build up resources on the other's Keeping Count is risky, using them in combat mitigates the boost Keeping Count provides) is a challenge, and overall the card is just very clunky, especially compared to the fire-and-forget nature of the likes of Dagger of Westernesse and Dúnedain Mark.

However, there is a case to be made for Keeping Count, under two specific conditions:

Here's how it works; you mulligan hard for your first copy of Keeping Count and put it on an attacking hero like Gimli, building up let's say 3 resources before finding the second copy.

You play that second copy on another attacking hero, like Glorfindel with Light of Valinor, giving him +3 . You attack with both him and Gimli while waiting for your third Keeping Count to show up, getting 2 more resources on Gimli's Keeping Count and 2 on Glorfindel's.

Then, after drawing your third Keeping Count, you play it on Dúnhere, giving him +5-

"Attached hero gets +1 for each resource token on another copy of Keeping Count that is above the current number of resource tokens on this card."

Going by this logic, in multiplayer if you deckbuild around Keeping Count, the sky's the limit with how ridiculous you can get your Keeping Count boosts. Instead of the Fibonacci Sequence, you'll be dealing with the Keeping Count Sequence: +0, +1, +3, +6, +10, +15, ad infinitum so long as you can keep killing enemies.

Is this enough to make Keeping Count good? Not by a long shot (seriously, FFG, errata: "Response: After playing Keeping Count, search your deck for another copy and add it to your hand. Shuffle your deck afterwards." And, quite possibly, "Limit 2 copies of Keeping Count in play." The Keeping Count Sequence made more reliable is a recipe for nightmares). But it is a fun thought experiment, and a reminder of how sometimes it's that which we dismiss as bad or weak that can surprise us with its strength.