Lower the cost to play Bill the Pony by 2 if you control Sam Gamgee.

Each Hobbit character gets +1 hit point.

"He gave me a look as plain as Mr. Pippin could speak it: if you don't let me go with you, Sam, I'll follow on my own" Sam Gamgee, The Fellowship of the Ring
Christine Bian 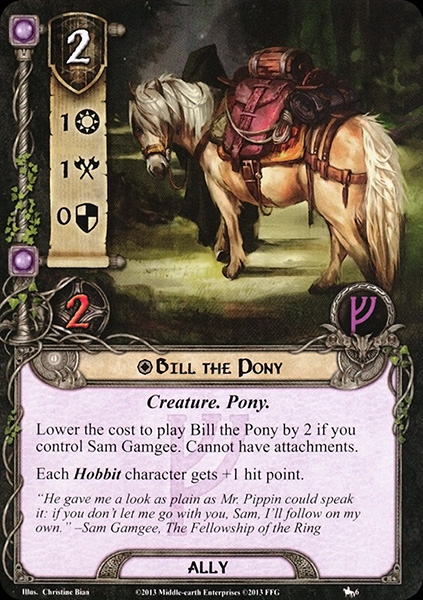 I was SO glad to see good ol' Bill appear in my favourite game, I almost cried. I always thought that he was very amusing in the book and he was always a bit of a beloved character. It is so nice to see that he is actually good and functions very well with his hobbit brosky and the rest of the hobbits.

Looking at the stats themselves, 1, 1 and 2 lines up exactly to what an ally that costs two resources should add up to. It would have been nicer to have the point in as an extra , but...you can't have everything. So, looking at the stats to resource spent ratio, I would consider them to be a fairly decent deal.

And then you look at the abilities of the pony, and you realize that he has a whicked set of them. For starters, built into his card is a way to get him into play for cheaper than usual. The trigger to get him in easier works only for Sam Gamgee, but not only the hero but also the ally Sam Gamgee. This leaves you with many options for decks as the decks could have the hero Frodo Baggins, which in turn gives the ally Sam Gamgee in easier which lets Bill the Pony enter play for free. The fact that Sam almost always appears in the hobbit archetype deck is very thematic and synergizes well with Sam.

His primary ability is perfect for hobbits as they notoriously have a very low amount of and they tend to squishy lads which is why Bill works so well with them. It helps them defend, if they need to in an emergency, and soak up archery and treachery damage. The health buff also doesn't only limit to hobbits you control, but also applies to other players at the table. This can encourage two or more players to play hobbit decks, which is what I have done frequently.