When Revealed: Choose a player. That player gains control of Tom Bombadil, ready and committed to the quest. At the end of the round, remove Tom Bombadil and a copy of Tom Bombadillo! in the victory display from the game. This effect cannot be cancelled. 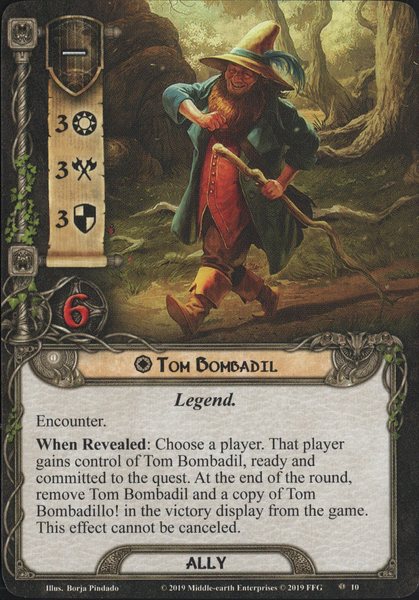 Out of the 4 player encounter cards in the game, Tom Bombadil has to be my least favorite.

First off, there's the consistency issue; unlike the other Encounter cards, you can only ever have 1 copy of Tom Bombadil in the encounter deck at a time. This makes him even more unreliable than the other Encounter cards, which are already pretty inconsistent, and 2 resources for something that might work is typically not a good deal (c.f. Needful to Know). Honestly, something that I think would make the Encounter Cards much more viable is a simple addition to the rules of player cards with Encounter in the form of, "Cards with the Encounter keyword gain "Shadow: Shuffle this card back into the encounter deck." Of course, that would also either break or necessitate an errata for Wind from the Sea.

Said Wind from the Sea also illustrates the main problem with Tom Bombadil: their shared lack of surge. Ranger of the North and Eagle of the North are strong, especially the latter one, but they don't completely break the quest phase when they're revealed; a beneficial card was revealed from the encounter deck, yes, but you still have to deal with a regular reveal as well. This decreases the random chance associated with them by making it less impactful whether they're revealed or not. If they aren't you have to deal with a regular encounter card, but if they are you still have to deal with that encounter card. Tom Bombadil and Wind from the Sea, on the other hand, don't have surge, meaning that you either spent 2 resources to water down the encounter deck slightly if they're discarded in some form or made it so that, barring quest effects, one player just doesn't reveal encounter cards during staging. This is really bad game design, making it so that the player's success is more dependent on whether a specific card gets drawn from the encounter deck than whether they manage to play well.

Wind from the Sea and Tom Bombadil's shared "Remove them from the game" makes this even worse, adding even more variance to already random cards. If Wind from the Sea or Tom Bombadil either doesn't get revealed at all or gets revealed on a turn where you can't really do much with them you effectively wasted 2 resources, whereas if they are revealed at a time that you can make use of them they can all-but win you the game. This kind of random chance, where you either straight-up win or waste a card and 2 resources, is more reminiscent of the Mirkwood cycle or even the Pokemon TCG than the developed game we know and semi-love.

Until Tom Bombadil gets erratad to gain surge, if you want a game more based on skill and strategy than a random card draw, you'll find it wise to act like Peter Jackson did and simply cut Tom Bombadil.

AlasForCeleborn 438
i like it. its hard to compose a deck that make it safe hat he has a good usage but have you played the two pods that can be included into the saga? in both tom bombadil appears, and often it makes the great difference. it felt very book-like, where tom bombadilsaves the hobbits. words like &quot;act like peter jackson&quot; let asume you have not read the books. this game try to based on the books not the films, and caleb did a good job in at leat 70 % of the cards and i count tom bombadil to them. — doomguard 1164 8/28/20
I know that Tom Bombadil is in the two saga GenCon quests, yes, but I don't like his appearances there either, once again because whether or not Tom appears can make or break a quest playthrough. I understand your point about how thematically accurate Tom is, inducing eucatastrophe when he appears, but there are times when mechanical needs need to be considered as well. Tom basically saves the day when he shows up, which, while thematic, is bad from a mechanical standpoint because it removes the player's skill from the equation determining victory or defeat. If Tom gained surge, I would be perfectly fine with him, because he'd provide a large benefit without completely disabling one of the core game mechanics for a turn. — AlasForCeleborn 438 8/28/20
cannot understan that think it is soo good. gildors council cost only 1 more and can be used several times and when u want it, it does nearly the same, and because itis an event you have far more options. even use it twice a round. — doomguard 1164 8/29/20
Gildor's Council does do something similar to what Tom does, yes, but the encounter will still get to reveal at least 1 card (as opposed to when Tom is revealed in solo) and you're simply not revealing an encounter card; with Tom, you're both not revealing an encounter card (functionally speaking) AND getting a temporary ally. You're turning what should be at best an inconvenience and at worst a challenge into an active bonus. It's like the Searching Eye burden from saga; if you draw it, not only is it bad because you have to deal with its text, it's also bad because it effectively decreases the amount of cards you just drew by 1, crippling top-decking even more. Double-lose and double-win situations like these need to be very carefully balanced, and I don't feel that Tom's inconsistency balances him enough. Indeed, I'd actually say it makes him worse; with how inconsistent he is, you're either irritated that you wasted 2 resources on something that just waters down the encounter deck slightly or doing a preemptive victory dance because he just got revealed as the only card in solo staging. — AlasForCeleborn 438 8/29/20
https://www.ringsdb.com/find?q=Tom+Bombadillo — Truck 1094 2/12/21
My Tom Bombadillo review. — Truck 1094 2/12/21
If his text box were to be blanked until the end of the round, would he still be removed from play, since his effect “cannot be canceled”? — Taudir 232 3/11/21
I was wondering that too. — Truck 1094 3/29/21
Blanking his textbox won't cancel an ongoing effect. — bane 52 9/11/21
i think this was mentioned in relation to Gandalf the blanking only last to the beginning of the end phase but he leaves play at the end of the phase — jvader 126 9/12/21