Response: After Legolas participates in an attack that destroys an enemy, place 2 progress tokens on the current quest.

"I can walk this path, but others have not this skill."
The Fellowship of the Ring
Magali Villeneuve 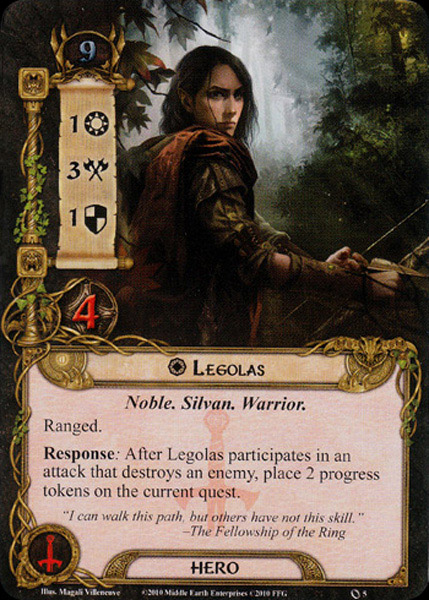 Legolas is a very good hero! He's one of the most efficient heroes in the core set. His ability is a response, so you could use him even in a turtle deck. His main competition comes from Brand and Bard, the other ranged tactics heroes. But Brand only works in multiplayer and Bard has more wasted stats than seastan has likes. Plus, as an elf, Legolas has access to an entire suite of weapon attachments.

Incredible and unique hero, very appropriate for his importance in the LOTR narrative.

Legolas has low Willpower and Defense but you shouldn't be using him for anything other than attacking with his amazing ability. His response effect has no limit so attach all of the Unexpected Courage, Rohan War Horse and Food and Drink readying effects you can to him for maximum death-questing.

My favourite deck to use this guy in is an Eagle one with Support of the Eagles, a beefy attack Eagle and Rohan Warhorse x2 to be able to get up to 6 progress placed in the combat phase by attacking enemies all over the mat. Similarly the Dunedain attachments or any other non-restricted attachments go with the dual horse theme.

If you opt for restricted weapon attachments there are plenty of Elven and tactic specific weapons that work great on him. He particularly works well with a Great Yew Bow, Rivendell Bow and Bow of the Galadhrim all combined with keeping your threat low/utilizing traps to be able to pick off enemies in the staging area and quest from their defeat.

Ranged is great in multiplayer where more enemies are present but he also works great in most quests and is always worth holding back for an attack.

Hands upon the Bow is the event made for him to be able to eliminate a just revealed enemy in the staging area and help remove threat while adding 2 extra progress and saving you from any nasty engagement effects or strong attacks from said enemy.

Don't forget the 2 progress tokens go on the active location first but can't affect those that are immune to player card effects.

All in all Legolas is the Tactics hero from the core set that has held up to the test of time the best and he is unique in being able to help pass stages of the quest outside of the traditional phase to help negate nasty treachery cards that would otherwise be game-Enders.

Check him out and you will not be disappointed.

Legolas is my favourite hero from the core set. His stats are not so great however his and his ability is the only thing which really matters, since I don't use him for nothing else and with Blade of Gondolin he is usually the one, who wins the scenario for me. Great artwork. Verdict: 5/5.

matrosh 459
We always use him in a Fellowship, since its ability to put progress token on the quest (provided the active location is cleared of course) outside the quest phase, and to boot through a Response with no limit per phase or round so it can be better abused with some readying effects, is often unvaluable since it can let us advance of quest stage with a timing more advantageous for the players. That alone makes it always worthwile in my eyes. — Alonewolf87 1655 1/16/19