Action: Exhaust a character you control with the ranged keyword to choose a player. Deal 1 damage to each enemy engaged with that player.

Arrows thick as the rain came whistling over the battlements, and fell clinking and glancing on th estones. Many found their mark. The Two Towers
Frank Walls 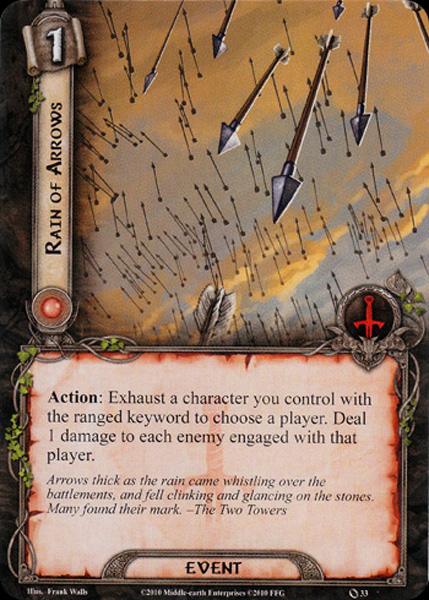 From all cards in core set, this is the one, why I, as solo player, want to try multiplayer game. I like the effect, I love the artwork and imagine to have six of those in two decks in four player game, sounds like great opener for the battle. Sounds epic, but I can't say yet. We'll see. EDIT: Well, after playing it, have to admit that this card won't do much in solo for sure, but now I'm not even sure how much it will do in fellowship or multiplayer, since one damage isn't much and to make this card at least little effective for any shooter, the other player need to face at least 3 or 4 enemies, not strong ones. But the artwork is really cool. Verdict: 2/5.

Rain of Arrows should have been named rain. A resource, an exhaust, and a keyword restriction for just one damage per enemy for one player? Even Skyward Volley and Hail of Stones are better than this.