Event. Cost: 1.
This card was errata'd

Combat Action: Choose an enemy engaged with a player. That enemy cannot attack that player this phase.

A few brave men were strung before them to make a feint of resistance, and many there fell before the rest drew back and fled to either side. The Hobbit
Lius Lasahido 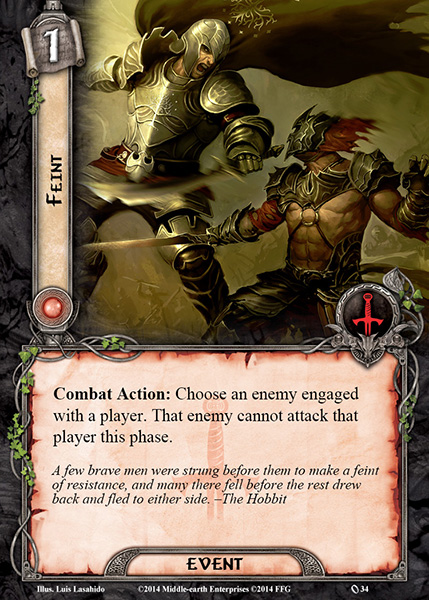 Feint is kind of like the tactics equivalent of A Test of Will - it allows a one-time escape from disaster, you'll never be disappointed to draw one, and you'll probably kick yourself for not holding back a resource for it at some point. It's a powerhouse card, and a likely 3x in any deck I build that includes tactics. It comes up all the time where somebody is just one body short of being able to survive a round or kill something, so then you play this and they basically gain an action for one coin. Not just that, but it shuts down all sorts of "when attacks" effects and eliminates the risk of shadow cards. In most cases it's like the enemy doesn't exist for the turn. If you follow it up with Forest Snare, you can effectively blank a lot of tough enemies without ever having to fight.

Feint is very good card which saved my game many many times. Usually saving it for the big ones which can get in my way. When I play deck, this is always part of it. The artwork is great. Verdict: 5/5.

matrosh 420
Feint works even better than a 1 cost chump blocker because it negates &quot;when attacks&quot; effects and shadow effects. It also combines wonderfully with Ents to give them that 1 turn they need to get awesome. — Mad Morderan 114 3/5/20