Action: Choose a player. Heal all damage on each hero controlled by that player.

"...and my house is open to you, if ever you come back this way again."
Beorn, The Hobbit
David A. Nash 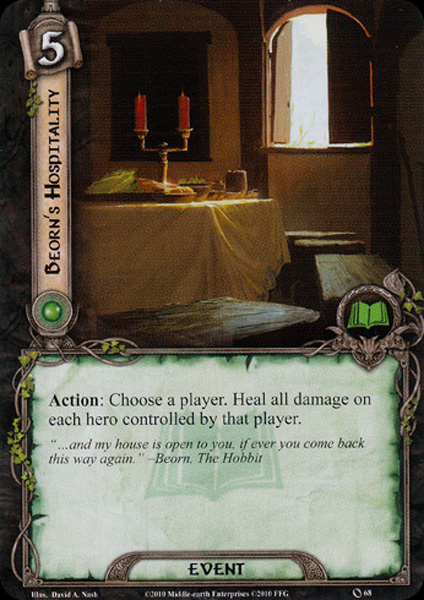 This is a really bad card. The Core Set in general fell prey to some unfortunate overcosting, but healing in particular got the short end of the stick, with this card being the worst offender of all. 5 resources, in , to heal all heroes controlled by one player? Pull the other one, it's got bells on, what does the card really do? Wait, that is the real card? Well, that's never getting out of the binder/box.

The thing is, firstly, healing is something you can manage without often enough. You try to avoid damage stacking up too much. When damage does stack up, a lot of the time it'll stack up on one or two characters. Getting it spread evenly between your heroes is pretty rare. Even if it is, the theoretical maximum this card could heal without you using hit point boosting effects is 12 damage, 4 on each hero. Realistically, it's never actually going to be that good. While remembering that all Core Set healing was too expensive, compare this to the Daughter of the Nimrodel. Still pricey at 3 resources, but heals 2 damage every single round unless she dies. Now that's more reasonable.

The thing is, if you compare Beorn's Hospitality in its ideal circumstances to the Daughter then maybe it looks somewhat favourable. The thing is though that as I mentioned, the ideal circumstances are never going to happen, and 5 resources is really expensive. Without acceleration, which isn't easy to come by in the sphere, that's almost two full rounds worth of resources, and given that is the classic card draw sphere, you're almost bound to draw something more worth spending those resources on. Perhaps something which will actually advance your board state rather than just waiting to reset it after you take a bunch of damage which you might not need to if you advance your board state. Plus, it's almost 2 full rounds worth of resources if you're mono-, which you may well not be. 3 rounds with two heroes. The effect is potentially decent but often won't be relevant since as I mentioned damage is unlike to be spread out in a convenient manner for this to be useful, and you're pretty much bound to have something else you'd rather be paying for. For 5-cost, a card has to be making a really huge effect on the game, and this is not huge enough.

The final nail in the coffin of this card was of course Waters of Nimrodel, which is basically what this card should have been. Not limited to heroes, cheaper, filling out extra cost in the form of Doomed, but that's easier to pay than resources, and targets all players. All of which is why Waters of Nimrodel is an amazing healing card, whereas Beorn's Hospitality is just an amazingly bad one.