"It is a fair tale, though it is sad, as are all the tales of Middle-earth, and yet it may lift up your hearts." Strider, The Fellowship of the Ring
Felicia Cano

The Hunt for Gollum #3. Leadership. 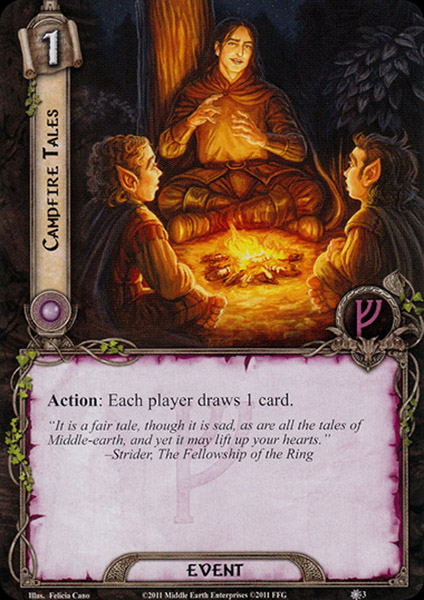 I'll make this simple. If you're planning to play a 3- or 4-player game, and you have access to Leadership, and you don't include Campfire Tales... then you're doing it wrong.

Consider: Mithrandir's Advice is bananas-good in mono-lore, right? One resource to draw three cards is amazing. So amazing that, by my own unofficial count, 80% of mono-lore decks on RingsDB include it. That's among the highest inclusion rate for any card in the game. (When last I checked, A Test of Will was just a shade over 80% in Spirit decks, and Daeron's Runes was in second place at just 62% of Lore decks.)

So even in the most resource-starved sphere in the game, trading one resource for three cards is craaaaaaazy. Well, that's what Campfire Tales gives you with three or four players, except it comes in the sphere that also has the most resource acceleration by several orders of magnitude. It should be a complete auto-include. By not including it, you're effectively saying "my deck is so much better than everyone else's decks that letting other people draw an extra card just doesn't carry as much value as letting myself draw an extra card". Which, if you're running some sort of Gloin or Boromir super-deck, might be the case. But it's still kind of rude. ;)

By and large, if you're playing in a large game, and you care about winning, Campfire Tales is the single best card draw in the entire pool. Or, at worst, one of the clear top two alongside Deep Knowledge.

Sure, it doesn't let you feel super-powerful because it's not directly benefitting you and your deck. But it's amazing. Use it. Win more.

(By the way, my unofficial count found even 17% of decks with two Lore heroes using Mithrandir's Advice, which suggests Campfire Tales should still be totally playable-- if not as completely overpowered-- in two-player games.)