Response: After a location is revealed from the encounter deck, immediately travel to that location without resolving its Travel effect. If another location is currently active, return it to the staging area.

"My cuts, short or long, don't go wrong." Strider, The Fellowship of the Ring
Ben Zweifel 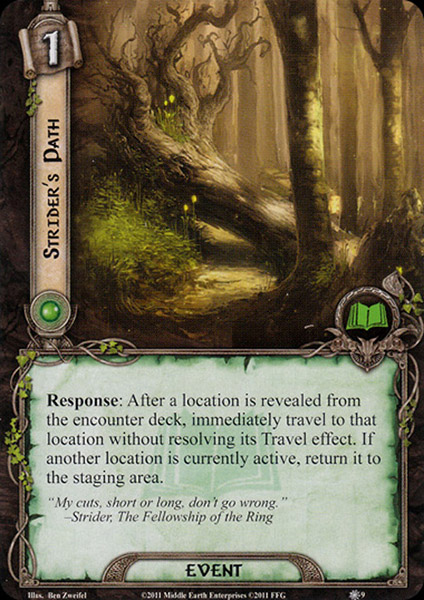 The main use for this card in the modern card pool is for tech against quests with locations that get have brutally high threat, like Forest Battleground. By moving it to the active spot when it appears, you never have to quest against it.

The other use case is with Path of Need. Quest with everyone, then when a location appears you swap it out, complete the new active location, then travel again to the one with Path of Need to have its effects active during the combat phase.

Mostly made obsolete by Thror's Map, which is reusable and generally just better. The exception is that with this card, you can immediately get something out of the staging area if it's going to ruin your questing this phase (The Brown Lands, Branching Paths, etc.) Whether that's enough of a risk to justify using Strider's Path instead, in most cases, probably not. Sudden game-ruining locations aren't as common as the other types, and a lot of them have effects that can be dealt with in the travel phase. Maybe worth a second look if you have a lot of discard manipulation or are playing against a lot of attachment punishment.

NoSoup4you 731
As soon as I found out Thror's Map was errata'd to a Travel action, I mostly stopped putting it in decks. The whole point of Strider's Path is to get that 5 threat (or god forbid nightmare 10 threat) location out of the staging area and into the queue for progress tokens as soon as it's revealed. Whether that's worth doing depends on the quest, of course, but I find it more likely to be useful than post-errata Thror's Map. — estyles 19 9/26/16
Depends on the quest I suppose. I may change my mind as I play more of the scenarios. — NoSoup4you 731 10/1/16
I think Strider's Path is severly underrated. I'd give it four out of five stars. Granted, another ally is still probably a better choice in most decks. — Wandalf the Gizzard 1843 1/2/18
In retrospect: travelling in the quest phase is much more useful than travelling in the travel phase. — NoSoup4you 731 3/1/20
3

This card does basically the same what West Road Traveller does, but which one is more effective, depends heavy on situation, i think. I will always prefer ally, cause events are much more situational from my point of view. This one needs to be played right after the location is revealed, while with Traveler, you need to survive quest phase to next round, to be able to switch it in planning phase (if you don't use Sneak Attack). However both are very helpful in dealing with high Threat locations. Artwork is ok. Verdict: 3/5.

matrosh 372
You miss one thing - with Strider's Path you can quest through a location just revealed an THEN travel to another location. This card is amazing. — warlock000 984 4/3/21