Limit 1 per deck. Attach to a location.

Heroes do not exhaust to attack, defend, or commit to a quest while attached location is the active location.

"However it may prove, one must tread the path that need chooses!"
Gandalf, The Fellowship of the Ring
Magali Villeneuve 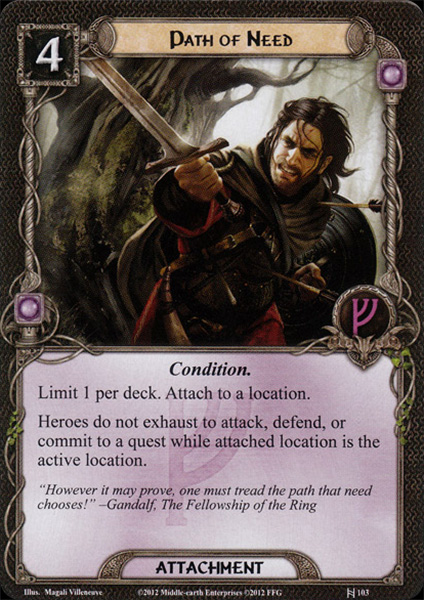 Path of Need is a cool card, but hampered by the facts that it's limit one per deck, and that active locations usually only stick around for one round. If you can work around those, this card will change your game. You can fish it out of your deck with Gather Information, Heed the Dream, or Word of Command, and recur it with Tome of Atanatar. It's especially useful in quests like Dread Realm and Three Trials that give you a couple stages to find it, and then slam you with a big boss fight and a location that can't be explored until you meet a certain condition.

Wandalf the Gizzard 1689
Not Tome of A, Second Breakfast. — Wandalf the Gizzard 1689 4/13/18
With Reforged now available this card can become even more good since it can be played in any phase — Alonewolf87 1417 8/19/19
Truth it is going to be amazing to sneak in after travelling to a location for a powerhouse combat round, not to mention it works in spirit discard-heavy decks — Christian_Medic 773 8/19/19
4

Path of Need might be my favourite attachment in the game, if not player card in general too. It's pricey but there are ways around that like Vilya, Bartering, or any slew of the resource-generating cards within the Leadership sphere to help pay for it.

This card is a solid card that can change your game and save the day when things are at its darkest. I used it in my solo Treebeard/Elrond/Gandalf deck that I took through the Sagas and it was the MVP for me. I combined it with the deck-scrying of Henmarth Riversong to know just how much to quest to break even and keep the active location in play, and then I had had three of the strongest heroes in the game able to defend and attack at will without exhausting. One of the most memorable battles involved Treebeard using his 3 Defense and 8 attack to defend with burning brand and then utterly destroy a horde of 7 Haradrim in Journey to the Crossroads. And another, and perhaps the strongest use of the card is using PoN in Helm's Deep where you quest hard to keep the locations in play, and again, having the strongest heroes in the game be able to fight without exhausting in that brutal quest was amazing.

With the addition of Reforged this card has new life breathed into it and I highly recommend it to everyone to try at least once. In an Elrond Vilya deck this card definitely has a forever spot locked in.