Response: After Longbeard Elder commits to a quest, look at the top card of the encounter deck. If that card is a location, place 1 progress token on the current quest. Otherwise, Longbeard Elder gets -1 until the end of the phase. 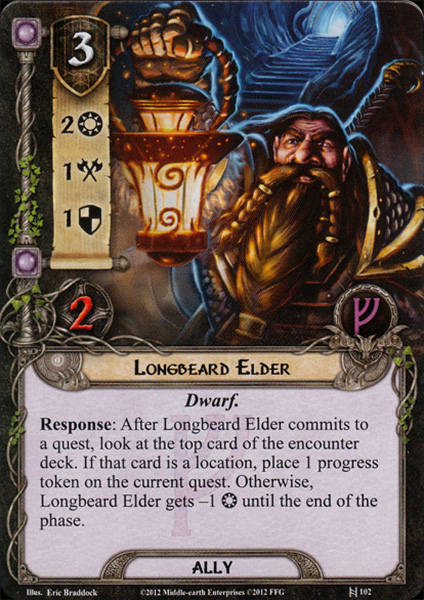 Longbeard Elder is somewhat underrated by the community. I think he's a good ally, especially in multiplayer, when you can advise other players on which characters to commit to the quest. Three resources is reasonable in leadership, and you'll get three willpower out of it with Dain. I don't usually trigger his ability in solo, because for it to be a net gain, locations need to be the top card over half the time; while one third is more likely. He's actually quite a good card.

Wandalf the Gizzard 1496
If you commit him first in solo, he's like a Henamarth Riversong that is also questing for at least 1. — mahercbeaucoup 1 4/22/21
or use henamarth, then commit him — Truck 728 4/22/21
Longboard Elder is a bit of an oddball. In solo, you commit all your characters simultaneously so unless you KNOW that the first card is a location (or feel like gambling) then it isn’t worthwhile. — Nystrum 1 5/21/21
Responses are optional and can happen in any order, so Longbeard Elder has good synergy with Leadership Aragorn. You can use the former’s response to decide whether to use the latter’s. — Nystrum 1 5/21/21