Forced: After Glorfindel exhausts to commit to a quest, raise your threat by 1.

Glorfindel was tall and straight; his hair was of shining gold, his face fair and young and fearless and full of joy; his eyes were bright and keen, and has voice like music; on his brow sat wisdom, and in his hand was strength.
The Fellowship of the Ring
Magali Villeneuve 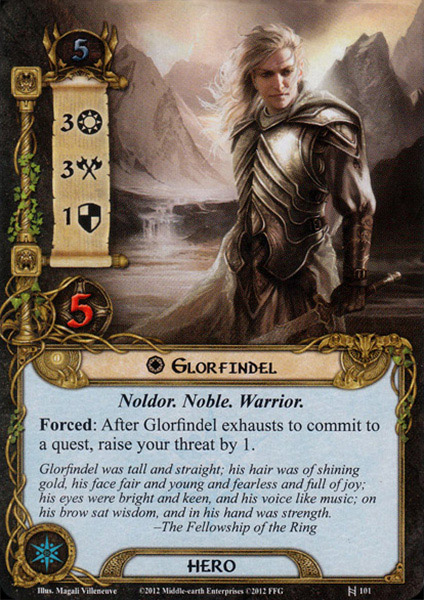 While opinions on Glorfindel have become less vocal than they once were, he used to attract both a lot of love and a lot of ire in different parts of the community. To understand why it's necessary to examine not just his merits as a hero but also the state of the card pool at the time of his release.

I'll get to examining the card in a minute, but first the historical context: at the time of his release Glorfindel was the lowest threat hero released (he still is), the first hero with more than 2 , and only the third hero in the game full stop to have more than 2 (and after all is what makes you win most of the time), after his inferior incarnation and fellow staple Éowyn. He was released alongside a pair of very powerful tailor-made attachments for action advantage and location control. Furthermore consider the other heroes at the time - Dúnhere and Dwalin both require a specific kind of deck, while Eleanor is primarily a support hero who works better at higher player-counts which many players never experience. Moving forward, Nori and Óin are both Dwarf-specific, Pippin is Hobbit-specific and bad, Fatty Bolger is of limited use and carries the same caveats as Eleanor, and Caldara again required a very specific deck. Until the end of the third cycle, if you wanted a hero to slot into a generic deck which would work at any player-count, you really only had the three options of Éowyn, Glorfindel and Frodo Baggins. Under those circumstances and given Glorfindel was newer and had other advantages, it's hardly surprising he ended up in as many decks as he did - he was really good and there were few other options so he was exceedingly difficult to avoid. Consequently a lot of people were very positive about his many virtues and his flexibility, while others got sick of seeing him in every single game they played.

Glorfindel's ubiquity is thankfully not what it once was. We have more generically useful heroes to choose from, we have more options for high or , and more low threat options (Hobbits). Glorfindel still carries the advantage of having all those qualities in one package, but he also retains the downside of having no positive ability, where other options may well have abilities which nicely synergise with whatever deck you're building. It's also worth noting that threat is generally not viewed as the huge downside it once was, so Glorfindel's primary innate benefit of a low starting threat can easily pale in comparison to other hero abilities. He's still good, but he's no longer inescapable. Anyway, enough about the game's history, let's consider the card:

The merits of the card are easy enough to see - he has 12 threat's worth of stats for only 5 threat cost. That's ridiculous. Of course he has no positive ability, which we could say is worth a bit of a discount. More than that, he actually has a negative ability! On the other hand, the effect of that negative ability is to raise your threat back towards where it should have been to start with. Even if we generously allow -2 threat for his lack of an ability, it'd still take 5 rounds for his negative to even up, and there are some games that don't even last that long, not to mention your threat level tends to be much more of a concern at the start of the game before you've played any cards than it is five rounds into the game when you've played plenty of cards. Even without all those points, you also have the alternative of not questing with him, simply using him as a combat hero - in which case even discounting his you still get 9 stat points for only 5 threat.

All this coniders Glorfindel in a vacuum, ignoring the other cards released in the same pack as him, most notably Light of Valinor. Since Glorfindel's negative only applies if he exhausts to quest, Light of Valinor completely negates it, allowing you to just enjoy your threat discount for the entire game, while also benefitting from Glorfindel's since he'll always be ready for combat. Also released in the pack with him was his horse Asfaloth, which now some of his lustre has worn off compared to more recent heroes is one of the biggest reasons to continue using him. Asfaloth is a decent bit of location control on any eligible hero, but on Glorfindel it's the most consistently powerful bit of targeted location control in the game - others can provide more progress in a burst, but not repeatably or as easily as just playing Asfaloth onto Glorfindel and exhausting it every round. The same cost of 2 in would get you The Riddermark's Finest, which does the same thing but only once since it discards itself to do it. Asfaloth is arguably the best thing about Glorfindel, it's phenomenally good location control which fits in just fine even in decks which don't really have a location control focus.

Other good cards to use with Glorfindel are the Rivendell Bow (often useful since Glorfindel can be used in questing decks which don't engage a lot of enemies) and Rivendell Blade, Fair and Perilous, perhaps Steed of Imladris to supplement Asfaloth; he makes you eligible for Elrond's Counsel, Lembas and (very thematically) Revealed in Wrath; and of course he can benefit from Lords of the Eldar. In general though things like thi are just bonuses to the already great package of just him and his two favourite attachments. On which I should note that while 3x Light of Valinor is pretty much mandatory for using Glorfindel, and it would seem very strange to omit Asfaloth if you have access, that's all you need, and this adds to his flexibility compared to some heroes who have larger kits of 'required' companion cards (though I feel the extent of this is often overstated). One final point to mention is that his low starting threat and access to Elrond's Counsel makes him a great choice if you're building a Secrecy deck - and if you build a two-hero Secrecy deck with him then you can potentially replace Light of Valinor with Strider (or if your other hero is also Noldor/Silvan, run both and just give Glorfindel whichever you draw first).

In the end, as much as Glorfindel's ubiquity got frustrating for a lengthy period of the game's life and I'm sure a design like this would never be repeated, the ubiquity was justified and has tapered off a bit now as Glorfindel has shifted into a more similar space to many other heroes, being one of many good options. He's a great generalist and pretty much never a bad choice to include in a deck, but he's beaten out by more specialised heroes in more focused decks. He can't storm the Dark Tower, nor open the road to the Fire by the power that is in him, but he is nevertheless a very good choice of hero to bring with you.

Glorfindel's starting threat is a joke!

As the other reviewer said, his stats warrant 12 threat. Even if we completely ignore his willpower due to the negative associated with it, that would still make Glorfindel a hero with 9 stat total, so that's what his threat should be. When looking at Glorfindel this way (i.e. pretending he has 0 willpower), his negative card text can be expressed as a positive perk, as in "Raise your threat by 1 to add 3 willpower to Glorfindel until the end of the round", further justifying the more balanced 9 starting threat value.

Furthermore, his low threat is exactly the opposite of what we would expect of him thematically. Threat in this game represents the enemy attention we bring to ourselves. That's why the more powerful the heroes, the more starting threat they have. This fits perfectly with the theme of the books, where a high-profile heroes such as Aragorn, Gandalf and others that Sauron deemed to be... well, a threat, drew his attention away while a "nobody" brought the One Ring to be destroyed to Mount Doom. Importantly, the reason Glorfindel did not join the fellowship was that he was so powerful that he would draw all the unwanted attention. So who the heck thought it a good idea to make him the second lowest printed starting threat in the game (and the first at the time of his release)?!

It makes no sense either mechanically nor thematically for this hero to have such a low starting threat. I have Glorfindel in my pet deck myself, but am seriously considering adding a house rule errata to make his starting threat 9.