Lords of the Eldar

Lords of the Eldar can only be played from your discard pile.

Action: Place Lords of the Eldar on the bottom of your deck from your discard pile. Then, until the end of the round all Noldor characters get +1 , +1 , and +1 . 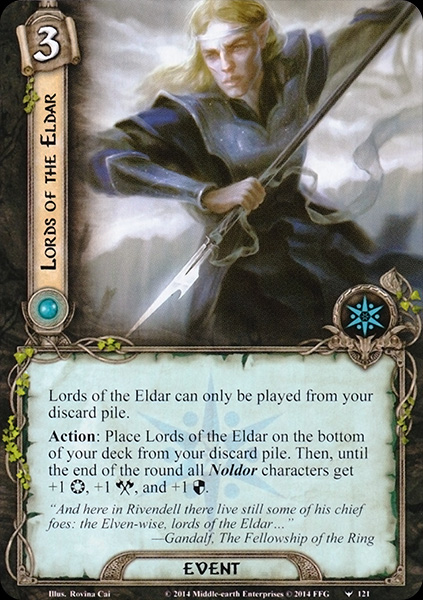 This card alone inspired me to build build a deck around the Noldor trait and to get deeper into deck building for Lord of the Rings in general.

It combines key elements of the Noldor trait in one card, very much like Elven-light.

1) You can only play it from your discard pile.

2) You will be able to play it again and again.

The effect on the deck:

To limit how often you can play Lords of the Eldar it is placed on the bottom of your deck after you played it, otherwise it would just be placed in your discard pile again. This results in an interesting question. Do you want to play it just once like a normal event or will you try and get through your deck quickly to be able to play it over and over again? The answer will influence the deck building by a lot. Even more if you decide you want to play it often.

The effect on the game:

But the card offers so much more once you think about on how to build a deck to get the most out of the card and its advantages. There are cards that are almost always useful and are a staple in almost every deck of the sphere they are in. Lords of the Eldar is different, it is keyed to a trait and thus leads to a more thematic deck or even fellowship of decks. Which can lead to a whole new way to experience known quests or the saga. If we get more cards like this, there will always be something new to explore in The Lord of the Rings, which I consider a good thing.

As a niche card that is only likely to be included in a Noldor deck, Lords of the Eldar obviously has limited general use. So let's assume that you're building a deck centered around Noldor heroes & allies. What are the advantages & disadvantages of Lords of the Eldar?

First, it is a universal modifier, much like For Gondor!, but affecting all Noldor characters--heroes & allies--controlled by all players. It costs 1 more resource than For Gondor! but also boosts willpower. It also lasts until the end of the round, whereas For Gondor! only lasts until the end of the phase. This allows Noldor characters with innate readying effects (Elladan, Elrohir, Watcher of the Bruinen, Trollshaw Scout), or with a readying attachment (Light of Valinor, Miruvor, or Unexpected Courage), or targeted with a readying event (Elwing's Flight, Tale of Tinúviel) to benefit from Lords of the Eldar's bonuses multiple times in a round. And, due to its requirements to play, you're more likely to see it later in the game when you have several allies and readying effects in play. It combines well with the in-theme Fair and Perilous, too. Since that card adds an attacking Noldor (or Silvan) character's to its , Lords of the Eldar essentially provides +2 .

While the requirements to play Lords of the Eldar may seem restrictive, they're usually not a problem for the typical Noldor deck. First, several cards can get Lords of the Eldar into your discard pile, often while also providing a beneficial effect: heroes Arwen Undómiel, Círdan the Shipwright, Galdor of the Havens, Erestor; allies Elven Jeweler, Erestor, Guardian of Rivendell, Glorfindel, Imladris Caregiver, Lindon Navigator, Trollshaw Scout, Watcher of the Bruinen; attachments Elven Spear, Steed of Imladris; and the event To the Sea, to the Sea! And those are just the Noldor-themed cards! Second, though 3 resources make it a somewhat expensive card for a Spirit Noldor deck--which may not have many more options than Arwen Undómiel for resource acceleration--the need to discard Lords of the Eldar first usually means you won't be playing it too early in the game when resources are tight. This is fine, as later in the game, when you've acquired some surplus resources, you'll also have more allies in play to take advantage of its bonuses. Or, if one of your heroes is a Hobbit, like Frodo Baggins, he can use Good Meal to play Lords of the Eldar for only 1 resource.

The final hitch is that Lords of the Eldar is placed on the bottom of your deck when played. Unfortunately, this keeps it from being recycled with The White Council or Map of Earnil, as one might do with Tale of Tinúviel, for example. However, Word of Command can fetch it for you at the cost of only 1 resource... and exhausting an Istari character. Hero Gandalf has all sorts of readying available to him and Over Hill and Under Hill Gandalf doesn't exhaust to quest so can use his second action to cast Word of Command. (Noldor decks usually have Core Gandalf's card drawing and threat reduction covered already anyway.) Or any Istari character can play it after questing on the turn he enters play if Galadriel is one of your heroes. Speaking of Galadriel, the thematic Mirror of Galadriel can fetch Lords of the Eldar from your deck if you have 10 or fewer cards remaining. And, if you have 5 or fewer cards, Galadhrim Minstrel or Heed the Dream will work, too. Of course, by then, normal card drawing effects would probably do the trick.

In the right kind of deck, Lords of the Eldar is a powerful card whose apparent drawbacks are easily mitigated. If you haven't already, give it a try!

Herumen 512
I would add to the previous comment that Mirror of Galadriel forces the player to shuffle his deck after use, which will removes Lords of the Eldar from the bottom of the deck. — phil_colons 1 1/16/17
can you play it for free with map of earnil when it's in your discard pile? — NicoDante 1 4/10/17
@NicoDante: Map of Earnil lets you play an event from your discard pile &quot;as if it were in your hand&quot;, so you will have to pay that event's normal cost. In the case of Lords of the Eldar, you wouldn't gain anything from Map of Earnil, since LotE can already be played from your discard pile. Further, if you used MoE to get LotE from your discard, you wouldn't be able to play it since it can only be played directly from the discard pile, not &quot;from your hand&quot; as MoE requires. That being the case, I'm not sure you can even legally target LotE with MoE. But, then, I'm no rules maven. — Herumen 512 4/25/17