"Here am I, naughty little fly;
you are fat and lazy.
You cannot trap me, though you try,
in your cobwebs crazy."
Bilbo Baggins, The Hobbit
Angela Sung 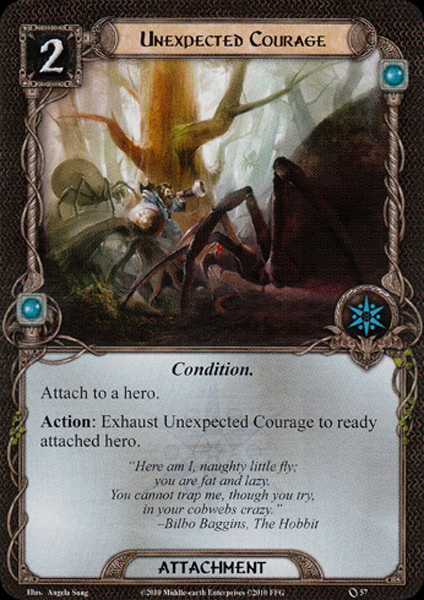 The gold standard in hero readying ever since the core set, and one of the reasons blue is so damn strong. It's a similar situation to Steward of Gondor, where they painted themselves into a corner with such a broadly useful card, and the more interesting alternatives just aren't as good usually. You also only get one copy in the core set (thanks FFG,) which means it's proxy time. Remember kids, a standard card is 2.5 by 3.5 inches, and Keeping Count makes a great backing material.

Action advantage is probably the most important part of a player's arsenal, if only to have your hero quest and ready for combat, particularly when your hero has an impressive statline all round, such as Treebeard, Gandalf or any variation of Aragorn. It's unrestricted too, so you can get a couple of copies out on the same hero so they can quest, defend and attack, ensuring that none of your heroes stats go to waste.

Where Unexpected Course really comes into its element though is with heroes who require you to exhaust to use their action. Stick it on Beravor and you gain 2 extra resources a round without wasting her stats. Put a copy on Merry (if Fast Hitch isn't available) and you have repeatable threat reduction whilst still being able to commit him to the quest. I would also put Thalin and Théodred in this camp as although their abilities aren't actions in themselves they force you to make use of their lowest strength stat. The most important use for UC though is for the bearers of the three elven rings, Vilya, Nenya and Narya which all require you to exhaust their respective hero to activate them.

All in all, any hero can benefit from UC if only to avoid direct damage that targets exhausted characters but it becomes seriously powerful on any hero with a high starting threat. A must have card in any deck with access to .

My favorite card! This is the most over powered card in the game. Also the best card in the game. SO many possibilities... Give to highly damaged Gimli, for maximum , Dáin Ironfoot, for great & , for dwarf decks (MY personal favorites), Éowyn in The Dead Marshes, and so on and so forth.

This is undoubtedly one of the greatest cards from the core set and the reason, why people usually buy another core set, however I still think to have only one copy of this makes the game more interesting and challenging and when this comes to hand it's like a Christmas. Extra advantage which makes your play a little bit easier and I think it should stay that way. 3 copies would make this card less special and also the whole game less challenging. But that's just me. Really nice artwork also. verdict: 5/5.

matrosh 420
I always thought that Unexpected Courage should have a limit of 1 per hero. More interesting that way but also too many copies stops it being “unexpected”. — Nystrum 28 1/15/22
3

Best card in the game. Seems the only way it would be fair is if it was restricted, but it's not. And for only two cost! I would use it for Beravor, so she can draw two cards for free, Denethor, Gimli, and especially Treebeard.