Action: Exhaust Beravor to choose a player. That player draws 2 cards. Limit once per round.

But in the wild lands beyond Bree there were mysterious wanderers. The Bree-folk called them Rangers, and knew nothing of their origin.
The Fellowship of the Ring
Tiziano Baracchi 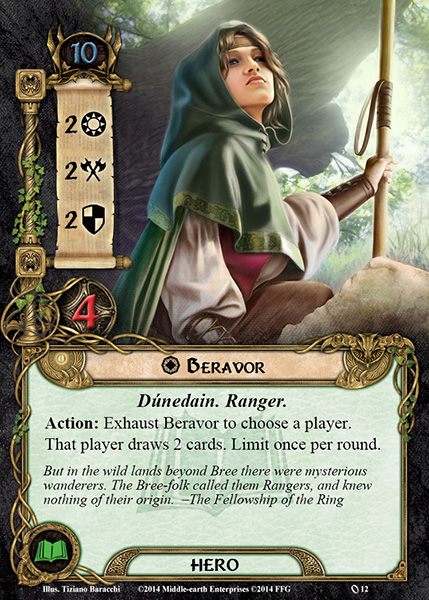 Beravor is a great hero. Not perfect, but great nevertheless. Let me explain why. First, her stats: Those are the typical ranger stats, 2 , 2 , 2 and 4 . Not quite extraordinary. And still, it somewhat makes her stand out from the rest of the heroes - the female heroes, that is: She is one of only four female characters in this game with 4 hitpoints (the other three being another ranger, Idraen, Galadriel, and Na'asiyah), and there are none with 5 (isn't that kind of sexist, I wonder?). Those 4 HP make her a lot more reliable in defending compared to e.g. Eleanor. The other stats are not very impressive each, but are not bad at all either, yet, they add up to an impressive threat cost of 10. This may be the biggest drawback of the card: Beravor is a very good glue hero, being able to flexibly defend, attack or quest, but she can only use her stats once per round, or not at all if you choose to use her ability, and this effectively makes her a 2/0/0 hero (or 0/2/0 or 0/0/2, or even 0/0/0), which is really not worth an initial threat of 10.

Luckily, Beravor has more to offer than just her stats and threat cost. She has got two very useful traits, Ranger and Dúnedain. This allows for some action advantage that is not restricted to only putting Unexpected Courage on her (which is of course a great attachment for her, nevertheless). She is also eligible for Wingfoot and Steed of the North, two cheap but potentially very powerful action advantage cards that allow Beravor to contribute her respectable 2 to the quest and then ready to attack, defend or draw 2 cards. Although she is not really build towards the Dúnedain archetype (since that was developed later in the game), she can profit from Descendants of Kings, and she is a valid target for Tale of Tinúviel. She also gives access to Ranger of Cardolan's Combat Action and Ranger Summons. Dúnedain Pipe can be attached to her for even more card draw, and she can make use of Blood of Númenor and Gondorian Fire if you manage to get some resources on her. The great thing about her balanced statline is that it is quite easy to make her respectable in every aspect of the game: With Protector of Lórien she can quest for 3 at the cost of one discarded card, which is the second highest amount of you can find in the game, or defend for 3 (or 4 or 5 if you are willing to discard more cards), which is not bad, either, especially considering her 4 that provide some peace of mind when blocking against more powerful enemies. If you are willing to invest a few resources in her, she quickly becomes a powerful jack-of-all-trades.

And I haven't even talked about her ability. When I first saw her, I did not quite understand how powerful it is to draw 2 cards, especially when you can use the hero to do something useful instead. But playing with her for some time, I quickly realized what drawing 2 cards (probably each round) can mean. I started to leave enemies engaged with me for an additional round in order to not use up her action (which, as I found out, neatly synergizes with the Dúnedain tactic of keeping enemies engaged with you), and instead drew cards. And three instead of one card drawn per round is a difference as huge as it can get. Beravor allows you to really get your deck going and to find the powerful allies you need, or provides the digging necessary to get a diversity of combos going. If you somehow manage to get action advantage out of her, you are a lucky person, enjoying either 2 , 2 or 2 and an additional 2 cards per round (all about her is 2, isn't it?). And she can target other players, too, which is great. For example, she can support a deck that really struggles with card draw and help it to find all the powerful weapons its heroes need. I would go as far as to say that her flexibility and ability even justify putting e.g. Wingfoot and an Unexpected Courage on her. She is just that great, and with some care and investment, she can handle most things the encounter deck throws at you (and draw cards, did I mention that already?). She is a hero that, I would say, is one of the few that really deserve action advantage.

So, why is she not perfect? Because she needs some efforts to really make her shine, and she tends to be a Dáin Ironfoot most of the time, sitting around and waiting, hoping not to be needed in combat and thus staying ready most of the time, and then being used to draw. Which is not wrong at all, I just feel like it does not do her justice. Moreover, she also adds 10 to your initial threat, which is not too much, but still something to be careful about. And then, she needs some time to really make up for that threat . But if you can afford that initial threat or are okay with it because the drawing is so invaluable (which it really can be), she is awesome, and one of the best drawing options in the game, flexilbe and repeateable.

Speaking of awesome, Beravor's card art I consider to be the best in the game. It really gives personalitiy to her, but still leaves her vague enough not to force one into a specific view of her. She looks young, and yet not really, beautiful, but not perfect or elven-like, and the light through the leaves in the background is just stunning. I also love the piercing blue eyes and the powerful grip around her staff, showing that she is one of the sturdiest women in middle-earth, and not some fragile thing like Arwen Undómiel. And I think Beravor is so awesome a hero that she really deserves that astounding art.

Taudir 246
And I might add that she is a natural target for The Grey Wanderer Contract, since she mitigates that contract's only weakness, card draw. — Taudir 246 6/17/20
9

When I first cracked open the core set, I seriously under-estimated beravor. "Glorfindel can Quest and attack better, Denethor is a better defender, and her card draw uses up her action," I thought. But she's an amazing glue hero and she'll never be twiddling her thumbs. Very good hero.

Beravor's effect is good but is it just me or does she die SUPER EASILY?!?! It seems that the pesky "Deal one (or two) damage to each exhausted character" always gets her after letting her take three archery damage cuz of her four .

Truck 1120
That's not necessarily a case of Beravor dying super-easily, then, so much as the result of stacking damage on characters. The Necromancer's Reach in the Core Set is meant to provide a lesson, namely don't exhaust characters with 1 health remaining when there's still the potential for them to get hit by direct damage. Beravor's bulk is okay, and A Burning Brand can help turn her into a defender if you really want, but that doesn't mean that she's above the &quot;Don't exhaust 1 health characters if there's The Necromancer's Reach or equivalent in the encounter deck&quot; rule. — AlasForCeleborn 464 12/19/20
2

Beravor is great hero, with great stats and ability, which is good enough for the threat cost. She can be useful in any deck as glue hero or defender, best to put Unexpected Courage on her, to be able to use her twice in round. Amazing artwork. Verdict: 5/5.

matrosh 372
Her ability states &quot;Limit once per round,&quot; but she's an OK target for Unanticipated Bravery due to her ability's usefulness and her flexible statline. — apparentlyalvin 73 4/19/18
What is a &quot;glue hero&quot;? — Mad Morderan 109 4/26/18
its not really a term, for me the glue hero is the one, which dont have defined function from the beginning and can be used flexible on more tasks, usually the third hero which is not dedicated quester, attacker or defender. — matrosh 372 6/14/18
1

Beravor is the best hero in the core set (yes, even above Éowyn) and I would argue that she is hugely underrated in the game at large. At 10 she doesn't hurt you too bad, and her 2/2/2/4 statline is nice and versatile. But who even cares about those stats? What she does is give you an amazing 3 cards per round. Cards in hand is more important than resources imo, so this makes her more valuable than the great Steward of Gondor by that logic. Additionally, she has 2 keywords (Dunedain and Ranger) that help with certain other cards in the card pool. She's great with Ranger of Cardolan as she is likely to draw him into your hand before and after you use him. Shines in dual or tri-sphere decks where you are depending on songs or A Good Harvest to add an off sphere.

Beravor is a and card draw staple.