Response: After a location is explored, ready Idraen.

"Where now are the Dúnedain, Elessar, Elessar? Why do thy kinsfolk wander afar?" Galadriel, The Two Towers
Jake Murray 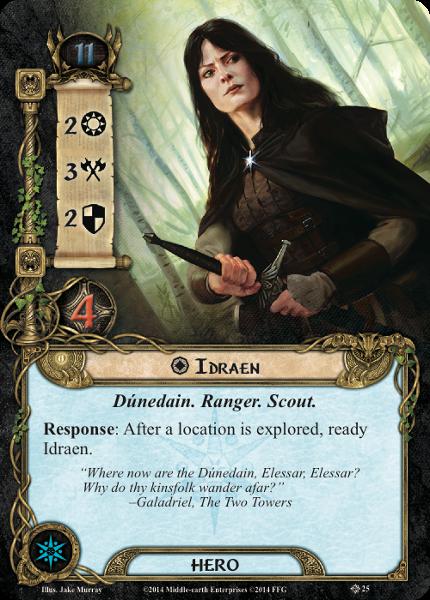 I've always felt that Idraen was a severely under-rated hero. She doesn't get a lot of attention, tends to be not so well rated by a lot of players. On a basic level, she's certainly good - solid, well-rounded stats and an ability which gives action advantage so you can put those multiple of those stats to good use. But to understand why I think Idraen is really significant I think it's worth considering the state of the card pool when she was released as regards heroes. Dúnhere and Caldara are specialised, Eleanor and Fatty Bolger are support-focused, Dwalin is quest-dependent, Nori and Óin are dwarf-specific, and Pippin is bad. Leaving just Éowyn, Frodo Baggins and Glorfindel as good generally applicable heroes. Adding a fourth option to a list of three is a really big deal, especially if you like a bit of variety in your deckbuilding. On top of the general applicability angle Idraen was only the second hero with 3 , and in general the sphere isn't exactly awash with high-powered statlines.

I suspect a big part of the less favourable reaction comes down to people just preferring Glorfindel, who has 1 more and 6 less threat, but if nothing else it's worth noting that Idraen's action advantage is built in as opposed to Glorfindel needing Light of Valinor. There's also a bit more to it. The standard assumption is that Idraen will ready after questing when you explore an active location - which depending on quest and player count could easily be every round. On that assumption it is comparable to LoV, but there's potential for it to be even more, if Idraen is used in a deck with a definite focus on location control. With cards like Asfaloth and The Evening Star in the mix Idraen can potentially be readied additional times, in any action window of your choice. Of course that requires that you get locations close to explored in advance, so a dedicated location control deck is a good idea, with effects like Warden of Arnor, Northern Tracker, Rhovanion Outrider, etc. Obviously this pushes her towards higher player counts where there will be more locations and a dedicated location control deck can be a good fit.

Leaving aside her good stats, the accessibility of her readying synergises very well with anything which requires exhausting a hero or character. There are a few generic hero ones, but of particular note there are a number of cards which depend on exhausting a Ranger or Scout character and Idraen has both those traits - things like Guarded Ceaselessly, Quick Ears, Distant Stars or Mariner's Compass could all fit into a location-focused deck, and Idraen is ideally suited to Expert Trackers, since if you're engaging a high enough threat enemy Idraen will exhaust to place progress on the location, exploring it and readying her again.

In general, Idraen is good just as a solid hero who can get two actions a round easily enough in multiplayer and has more impressive stats than most heroes, but also if location control is a particular focus she can benefit hugely, enabling all kinds of shenanigans not to be underestimated. She's great in either case.

Warden of Arnor 5139
Always happy to see some Idraen love! I do think she loses the spotlight to some other more popular* choices. I'm hoping that as the scout trait develops we'll see her come back. As it stands I'm looking to make a location deck including her and bringing it to Gen Con (doubt there will be any issue of uniqueness clashing) — SecondhandTook 531 6/20/17