"... though I cannot disappear, I have hunted many wild and wary things and I can usually avoid being seen, if I wish."
Aragorn, The Fellowship of the Ring
Eva Maria Toker 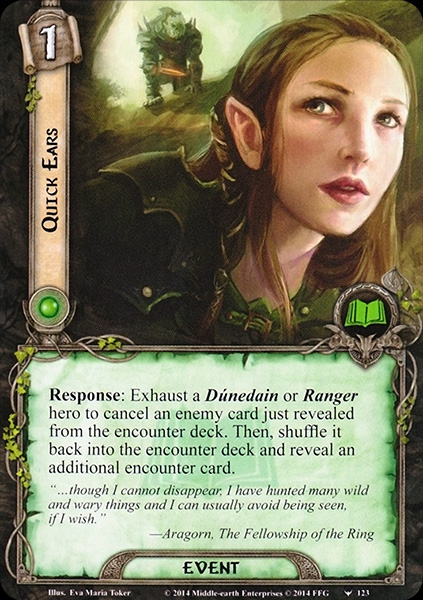 I will admit that I probably had the same reaction nearly everyone else had in the community upon seeing this card for the first time. My first thought was "sweet! another form of encounter card cancellation!" followed by, "wow, exhaust a hero of a specific type as part of the cost? that's too restrictive - probably unplayable".

It is probably for this reason that it took me so long to slot Quick Ears into one of my decks. It's a good thing I did, as this card is far better than I had previously imagined. Allow me to explain by breaking this card's cost and effect down.

At first glance, the cost seems rather restrictive. However, as a long time enthusiasts of the "ranger" trait, I learned a long time ago that ranger characters tend to be high /high resource cost characters for stats that are fairly balanced across the board. If we took an average of all ranger characters, I would not be surprised if the mean were close to 2 , 2 , and 2 . What this means is that rangers are GREAT targets for action advantage, and likewise are typically over-valued if you "don't" have action advantage. So if you are running heroes with the ranger trait, you probably really should be including action advantage as well to take advantage of their balanced resource spread and the growing trait sub-theme of "exhaust ranger character to..." abilities. It is a little off putting that this particular event is restrictive to heroes rather than all characters, but the upside is that a Ranger traited hero typically has good combat stats and can add value by staying readied through the quest phase regardless of whether their exhaust is needed for an action.

The ability belongs in the very exclusive and powerful class of effects known as encounter card cancellation. Technically, there is only one other card like it, The Door is Closed!, since A Test of Will and Eleanor both technically only cancel "when revealed" effects, and not the entire card. At first glance, it appear that there isn't much net gain for the cost of a hero exhaust and one resource since you discard 1 encounter card just to replace it with another. However, I've found through play that this card is VERY useful in the following situations:

All in all, this card has managed to find a "1x" slot in my mono Ranger trap deck.... and sometimes 2x in scenarios with a lot of surging enemies or enemies that come with "when revealed" effects.

Wait a minute... You must pay then EXHAUST a character to maybe shuffle a nasty card to then draw another copy of that card? Hmmm... I don't play this one. If you play this card, I'd be curious to know your success rate!

Lecitadin 184
I was going to argue that this card, though not as good as A Test of Will, had certain advantages over it that could make it worth playing, one of which, of course, is that it's available in Lore. But then I realized that I (for some unknown reason) thought you had to exhaust a Ranger or Dunedain character to play it, and it turns out you have to exhaust a Ranger or Dunedain hero. Ick. Hard pass. — estyles 19 9/18/16
I've got a forthcoming positive review on this card. I'll try to get to it tonight. — MDuckworth83 3054 9/21/16