Attach to a quest card in play. Limit 1 per quest.

Response: After attached quest card is defeated, each player either draws 2 cards or heals up to 5 damage from among characters he controls.

"...for ere the fall of Nargothrond or Gondolin I passed over the mountains, and together through ages of the world we have fought the long defeat."
Galadriel, The Fellowship of the Ring
Jose Vega 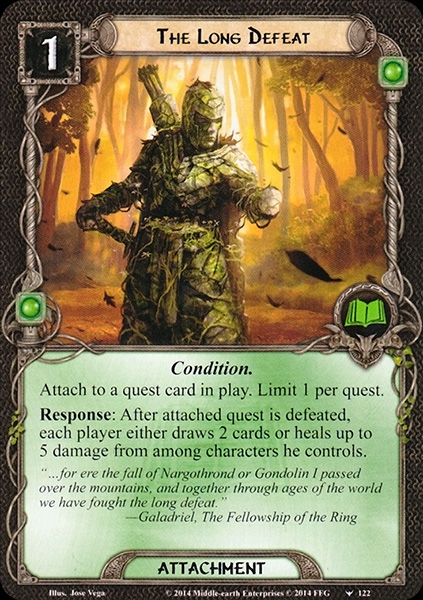 Continuing my interest in cards that can do more than one thing, I've decided to take a look at The Long Defeat. It's similar in play and cost to Ancient Mathom or Elf-stone, but attaches to a quest rather than a location. Unlike those cards, however, it provides its benefit to every player--not just the first player--making timing less of a concern than with those cards. It also offers each player his choice of either of two effects: 1.) draw 2 cards or 2.) heal up to 5 damage from among characters he controls [heroes and allies]. At its most basic, it can serve as a kind of a reset between quest stages in multi-stage adventures. So, generally, its effectiveness depends upon the number of players and the adventure being played. The more players, the greater its value-to-cost; and the more quest stages in the adventure, the more opportunities to play it. Though it is less effective in one-handed solo play or against adventures with only one quest stage, it can still be an effective card worth including in a solo deck.

The Long Defeat was introduced in The Lost Realm/Angmar Awakened cycle, as was the side quest card type, so I have to imagine the designers saw them being used together. Most of the adventures in this cycle have one or more encounter side quest. This means an adventure like Intruders in Chetwood that has only 1 quest stage, but also has 4 side quests, can still benefit from The Long Defeat. Side quests also typically have fewer quest points than many quest stages, so can get you the benefits of The Long Defeat more expediently.

Lastly, another card that synergizes nicely with The Long Defeat's healing effect is hero Elrond. His response effect reads "After a character is healed by another card effect, heal 1 damage on it." So, conceivably, if you were to use The Long Defeat to heal 1 damage on each of 5 different characters, Elrond's effect would heal an additional 1 damage on each character, thus doubling its healing effect! [Someone please correct me, if I'm interpreting the rules incorrectly here.]

In the right deck or versus the right adventure, The Long Defeat can be a great card. It provides a choice of useful effects to all players and perhaps the most flexible and potentially powerful healing effect in the game. And combined with player side quests (from any player's deck), it can be a great addition to any deck with access to resources.