Response: After Northern Tracker commits to a quest, place 1 progress token on each location in the staging area.

"What roads would any dare to tread, what safety would there be in quiet lands, or in the homes of simple men at night, if the Dúnedain were asleep, or were all gone into the grave?"
Aragorn, The Fellowship of the Ring
Kristina Gehrmann 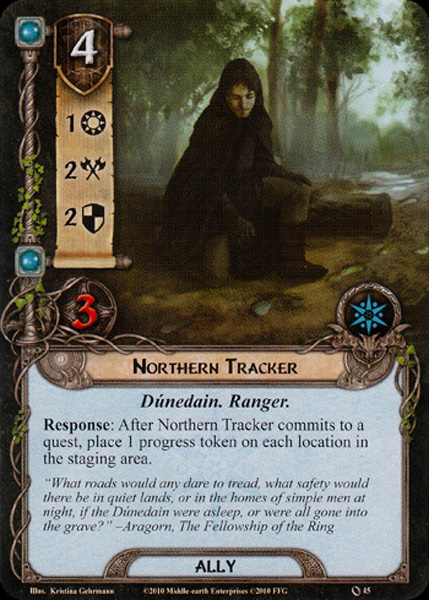 Northern Tracker is an amazing card. Four resources may seem steep to a beginner, but that ability is insane. He can take out twenty-three of the 594 locations in the game. And if there isn't a location that needs exploring, he still has a very strong two attack, two defense, and three HP. Just awesomesauce.

Tracker is my favorite ally from the core set. His ability saved my games million times, his stats are great for that price. He is not unique, which makes him even greater, cause if you got a pair of them on the table, the locations disappear very quickly. Very nice artwork. Verdict: 5/5.

matrosh 375
One of the best cards in the core set, and possibly the whole game! It’s almost like a brilliant event, only you can use it again and again! For a reasonable price as well! — ThorinSonOfMyDad 1 2/3/20
3

I've come to realize that Northern Tracker is one of my favourite cards in the whole game, as far as non-unique allies are concerned.

Ever since playing the core-set vs the Anduin, their ability to take locations out of the staging area has been so incredibly useful. Sure, it comes at a steep price of 4 resources, but they can also hold their ground in combat with their well-rounded stats. In particular, they work well with Galadriel's ability and can also be used with Tale of Tinúviel.

I also think that their artwork (and flavour text) is true to the spirit of Tolkien's work. In this context, I want to add two more quotes from the books:

"Lonely men are we, Rangers of the wild, hunters - but hunters ever of the servants of the Enemy; for they are found in many places, not in Mordor only." (Aragorn at The Council of Elrond)

"Stout men and lordly they are, and the Riders of Rohan look almost as boys beside them; for they are grim men of face, worn like weathered rocks for the most part, even as Aragorn himself; and they are silent." (Gimli in 'The Passing of the Grey Company')