Galadriel cannot quest, attack, or defend. Allies you control do not exhaust to commit to the quest during the round they enter play.

Action: Exhaust Galadriel to choose a player. That player reduces his threat by 1 and draws 1 card. (Limit once per round.) 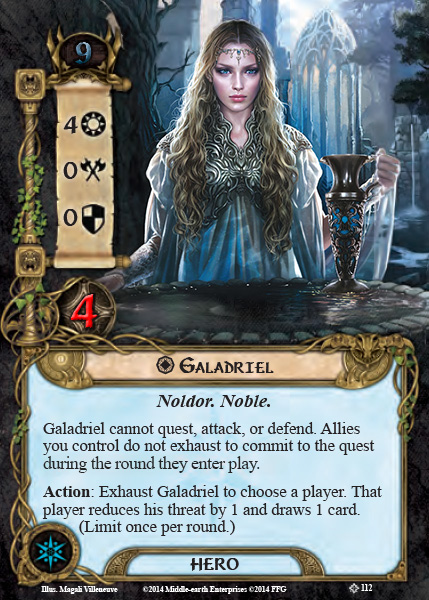 Being a great lover of variety, when I first got into this game seriously I was very disdainful of the general trend of putting Glorfindel into basically every deck. But then with a classic lack of self-awareness, I proceeded to do the same thing with Galadriel for some time after her release. "Hmm, this deck isn't working? Swap out one of the heroes for Galadriel! Bam, fixed." In my defence, everything is better with Galadriel.

OK, let me qualify that statement. Not literally everything. But seriously, the reason I went through that period of putting Galadriel into more or less every deck is because her general purpose in decks is to make everything run smoother, at the expense of not being able to do anything herself. Her abilities all serve to increase the efficiency of pretty much any deck you put her in, and then you add in her attachments and it gets crazy. Let's look at things one at a time:

The passive which allows allies to quest without exhausting can be very useful (the one downside being that it blocks ally Arwen) since you can then use that additional action for combat - or conversely if you've just played a combat ally who has a point or two of then for one round you can use it. Or indeed an ally which has to exhaust for their ability, like Gléowine, Zigil Miner, Warden of Healing, etc. This also seriously boosts the power of temporary allies - Gandalf, Elrond and Saruman all have very impressive statlines, so getting two actions out of them while they're in play is a pretty big deal. Very thematically, this ability also synergises perfectly with a Silvan deck featuring Celeborn, since your Silvan allies will all have increased stats the round they enter play and will be able to use more than one of those stats thanks to Galadriel. It works well with any deck using allies with more than one good stat in general, such as Gondor or Dwarves, but even if the allies aren't so impressive, sometimes an extra 1 or can make all the difference. If your deck uses allies at all, then you will probably make some use of this ability.

And then we come to her action. Firstly, the threat reduction. If you consistently target yourself with this then it cancels out the natural threat raise every Refresh phase, so barring other threat raises from player or encounter card effects, you will stay at the same threat all game. Include some other threat reduction (Elrond's Counsel would be a natural and easy fit) and you can cancel out other raises or end up lower than your starting threat. Given that turtling below enemy engagement costs while you amass a better board state can be an incredibly effective strategy, this is potentially very powerful. Even if you're not specifically turtling, having that control over when you engage enemies can be incredibly useful. This also applies to using Galadriel's ability on other players - if there's a particular enemy you're not prepared for, you can just persistently drop the highest threat player back below its engagement cost. Alternatively the constant threat reduction from Galadriel can help counteract the downside of abilities which raise threat, like Frodo Baggins, Hobbit Gandalf, Doomed cards, Gríma or of course Boromir. It's a pretty potent ability, no two ways about it, but I haven't even started talking about the best part, that being the card draw. Card draw is the most powerful ability in the game, because it gives you all the options for all the others, so the ability to draw any player an extra card in any action window right from the beginning of the game is amazing. It should be noted of course that Beravor can similarly draw any player two cards, and this is also incredibly powerful, more so than I think some people give it credit for - on the other hand Beravor doesn't have the other benefits of Galadriel. She has stats, giving the flexibility to potentially quest or participate in combat, but Galadriel getting extra actions out of allies and keeping your threat down helps to avoid the need for your third hero to be doing anything in combat. A further point to bring up is that until Galadriel was released the sphere was very light on card draw. It had Ancient Mathom, but that's conditional on you exploring a location and targets the first player, so you potentially have to wait a round or two to use it. Song of Eärendil draws a card, but unless you're actually going to make use of its other ability, one resource for one card to replace itself isn't a great exchange rate there. So Galadriel's ability was powerful in and of itself, but even better when you consider the context. Especially since the sphere does have a few things it may want to draw fast to locate - A Test of Will, Hasty Stroke, Unexpected Courage for example. Regardless, doubling your draw is not to be sniffed at.

So that's Galadriel in and of herself. It's worth noting that since she can't commit to the quest (unless her text box gets blanked), her 4 doesn't generally do anything except maybe let you trigger a big Tale of Tinúviel. And on top of that she's +1 threat for her stats. Discounting that she just has 4 hit points for undefended attacks and direct damage, and yet she gets a threat cost of 9 for those 4 hit points. You may ask, is her ability really that good that it's essentially costing you 5 starting threat? And I would say, yes, it absolutely is worth that 5 threat, especially given the threat reduction element of it meaning that 5 rounds in use of her ability will have made up that difference. And all that is considering Galadriel in a vacuum, without her particular attachments which were both released in the same pack. Let's take a look at those as well shall we...

Nenya. Well, needing a 1-cost attachment to be able to quest doesn't sound that great in principle, but on the other hand, most heroes don't have 4 . 1 resource for 4 is an incredibly good ratio. Furthermore, Nenya is better than just getting an extra 4 for a couple of reasons - firstly the minor point that technically Galadriel is not committing to the quest and thus will not be subject to any negative effects targeting characters committed to the quest, and secondly that it can be triggered after staging when needed rather than needing to be sent up front like most questers. And of course if you don't need it then we return to Galadriel's own incredibly powerful ability.

And the real doozy to my mind, Mirror of Galadriel. Search the top 10 cards of your deck for any card and add it to your hand? That's really powerful. We have some comparable effects, but Master of the Forge is the only repeatable one, looks at less cards and only works for attachments. OK, the Mirror then has you do the random discard afterwards, so it's not perfect, but since your regular draw has been increased by Galadriel you can have decent odds of discarding something other than the specific card you pulled out which you really wanted. And in exchange you can find whatever you really need at a specific moment. Oh, also if you're pulling out a card and are worried about the discard, I'll remind you that Dwarven Tomb is in the sphere as well. And of course you can negate the discard with a Silver Harp and then just fill up your hand with exactly what you want. I could go on, but I'll save it for the review of the Mirror.

So that's Galadriel. Without a doubt, one of the most powerful heroes in the game, with or without her toys. She just helps out with a bit of everything. Like I said, everything is better with Galadriel.

Warden of Arnor 4987
I totally agree that Galadriel is awesome. But my question, since I love putting together Ent decks, is to ask: does her ability mean Ents can quest on their first turn in play even though they are exhausted? — Mad Morderan 109 5/10/18
@Mad Morderan, unfortunately no, since ents enter play exhausted, they cannot commit to quest, defend or attack the play they enter. Now if you have a way of reading the ents (leadership Faramir, Ever Vigilant event etc), then they can ready and quest without exhausting the first turn and then defend/attack. — Lanster27 4 5/22/18