Action: Exhaust a Noldor character to ready a Dúnedain character, or vice-versa. Until the end of the phase, add the exhausted character's printed to the other character's , and .

Long was the way that fate them bore,
O'er stony mountains cold and grey,
Through halls of iron and darkling door,
And woods of nightshade morrowless.
The Fellowship of the Ring
Magali Villeneuve 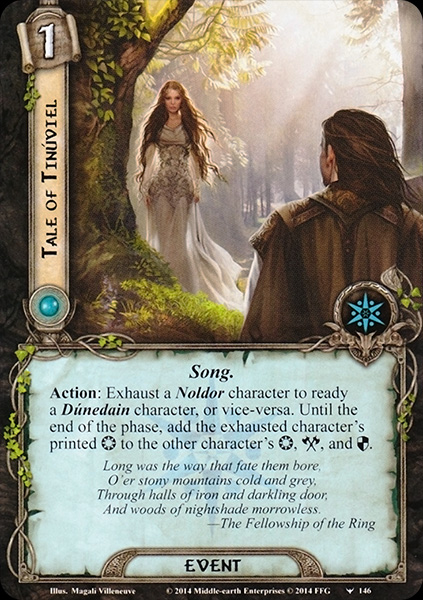 It's been a while (about 2 years) since I wrote a card review, but playing a deck I built around this card makes it clear that it requires one! This is a deceptively powerful and versatile card that actually takes a little bit of skill and timing to play to optimum effect....which are ALWAYS my favorite cards in the game. Also worth mentioning...the stunning Magali art combined with an amazing lore reference, and how it's connected to the mechanics thematically make this card an absolute masterwork of game design that ANY game designer should be proud of.

Thematically, it represents the historic alliance and bond of trust between the Edain (the men who would turn away from the Shadow and turn towards the light of the Eldar) and the Noldor in their struggles against Morgoth in the land of Beleriand during the First age of Middle Earth. The epitome of this bond was realized in the love story between Beren, one of the greatest heroes of the Edain; and Luthien Tinuviel, the most beautiful evening star of the High Elves. This ancient lay is repeated in the third age with the bond between Arwen Undomiel and Aragorn crowned King Elessar of Gondor. It's the sort of powerful stuff that sets Tolkien in a different league from other fantasy authors.

Mechanically, it is basically what I'd call an action exchanger, sort of like Spare Hood and Cloak....trading the action of a Noldor character for the action of a Dunedain character with an added perk of a +1 to +3 global stat boost for a phase (based on the of the exhausted character). There are two basic ways that it is used in gameplay..... either to trade willpower for combat power between two "powerful" characters, or to trade off the action of a "weenie" to give to a powerful character (likely with a +1 stat bonus). Essentially it basically smooths out the needs of willpower vs. combat in a particular round with action advantage and a stat boost.

An example of the "weenie" use is pretty straightforward. You play a card like Elven Jeweler and leave them standing for the express purpose of readying a more powerful character like Aragorn in the phase that he is most needed.

Between more powerful characters, it is a little more nuanced (and powerful if used correctly). The ideal is to exchange the action of a high character, such as Arwen Undómiel, to ready a character with all around decent stats, like Aragorn. What is even more nuanced is that you can optimize the timing on this effect to fine tune it to the demands of the round. I will demonstrate with the following examples.

I'm sure there are several other creative uses for this card (like readying action based abilities such as Beravor) and other timing nuances that I haven't even mentioned. In short, any deck that has spirit and a combination of Noldor and Dunedain characters should probalby have atleast 1x copies of this card, if not more.

In short, it is a nuanced, potentially powerful, stunningly beautiful, delightfully thematic card that represents the soaring heights of game design and theme that have been accomplished in this game.

MDuckworth83 2910
&quot;the stunning Magali art combined with an amazing lore reference, and how it's connected to the mechanics thematically make this card an absolute masterwork of game design that ANY game designer should be proud of.&quot; — Quetzal513 71 4/10/18
I failed in quoting your first paragraph, but meant to add a ringing endorsement for your words; couldn't be stated better! — Quetzal513 71 4/10/18
Yeah, I can see why Aragorn gets ready to exhaust Arwen. — Caedus 36 11/23/21
Thanks for the comment about the history of the story of the card. It was already one of my favorites and now I like it even more! — Madd.Dawgg 26 4/17/22
6

This is one of my favorite cards. Note that it says "printed" only. (See my edit, but I had been playing this incorrectly.) Printed means only the amount on the "printed" card not counting any boosts from other effects.

This card goes extremely well with Galadriel who can't do Siege and Battle quests with Nenya. It's a much-needed combat boost as well, and it makes Galadriel into an attacker and a blocker in a way (something she normally cannot do). With Nenya you can quest with a Dunadan, then use two ToTs back-to-back, and then Nenya it to the Dunadan. (The Dunadan will be contributing his base twice + 4 + Galadriel's with any non-ToT bonuses.) (Another way to think of it, is the first ToT gives +4 from Galadriel and the second ToT adds the Dunadan's printed to itself.) With Spare Hood and Cloak, Galadriel can do ToT twice. This is mostly useful with Attacking where you can give +8 and .

With Light of Valinor it lets Arwen Undómiel and Glorfindel become event-speed shields. You can exhaust a Dunadan to block, play ToT, ready the Dunadan, benefit from the +3 (If you're using Andúril it's going to benefit from the +3 as well) on that attack, and the Hero is ready to do another block (or attack) with the +3 (or ). Try it out.

This is a dark horse and definitely consider running it in your next deck if you have the correct traits available to use it. Or if you have partners that have the right traits. You can use it to untap a friend's character.

EDIT--> I originally thought this worked by bouncing it back-and-forth for exponential growth. However, someone (thankfully) pointed out it explicitly says "printed" only. I had been doing this incorrectly for a long time. (Not just on this card, but the concept of 'printed' as a word in the game. As discerning as I am, I guess I never noticed it. Luckily I have a screenshot of the final frame of all my quests, so I can do an audit and see if I need to redo any with my ToT deck.) Fortunately, Nenya does not specify "printed" so there is probably some trick with ToT here. Truth be told, I rarely used the bounce effect unless desperate, so I'm sure I will need to redo a few. I also did it 'just for fun' to see how high I could get it a lot. Thanks and apologies.

The strength of this card seems to come from making the most of powerful actions in the combat phase, potentially abusing that the additional stats will last through the defence and attack steps.

If you're using a cheap ally to ready a more powerful character then you're paying for the readying effect and Miruvor is cheaper (free) spirit option and wont cause a character to exhaust. You really need to abuse the combat phase to make this card worth more than Miruvor.

I'll use Arwen Undómiel because I'm writing this in response to @mduckworth83 's review. If you were to use Tale of Tinúviel with these characters, no other readying effects, you gain no additional stats for the round at the cost of a resource. If you use additional readying effects you get the full benefit of the +3 after the initial one without the additional cost of exhausting a character for it, this is when the card gains some usefulness.

If you use Tale of Tinúviel for it's defence you could have played any number of cheap allies to block instead.

For an attack you could simply have not exhausted Arwen Undómiel and have gotten an additional damage from her, you also save 1 resource and have an additional card in your hand. Instead you could ready whoever your third hero is with Miruvor and gain the use of that character, odds are they have 2 attack and combined with Arwen Undómiel you're getting the +3 you would have from Tale of Tinúviel without having to spend a resource.

I believe Tale of Tinúviel should be used exclusively in decks with additional readying effects, as it's a spirit card there is no reason not to play the event on a character with Unexpected Courage attached at the very least. It's possible that the flexibility of the card is worth the additional cost but what you're paying for is the option to use it for defending as the attack bonus is negligible when compared to Miruvor.

Originally I'd written this because I disagreed with @mduckworth83 's assessment of Tale of Tinúviel, specifically, "any deck that has spirit and a combination of Noldor and Dunedain characters should probalby have atleast 1x copies of this card". I think he's correct because I don't see why anyone would exclude Unexpected Courage from a deck already using spirit.

4/5, should be included if you're able to satisfy it's condition and tweaking your deck to give you an excuse to play it is worth considering.

Covaxe 12
The deck that I use ToT in does not have other readying effects. I originally had Unexpected Courage and ended up cutting it because I didn't have the space. UE can't be played past the planning phase. It is also tied to one character and doesn't give me the burst of flexible combat power when I need it. I have literally won games with a well timed ToT play. With ToT, I can use Arwen to generate a resource on demand in any phase and use it to play ToT when I most need it. The added flexibility and combat boost of Tot bumped out UE since they were competing for the same slot. — MDuckworth83 2910 3/18/18
As an additional point, UE is also boring to play like most Core set staples. It doesn't take any skill, where ToT rewards skillful play and tight deck construction. Anytime I can make a solid case for replacing a Core set staple, I do. I haven't played Steward of Gondor since 2015. — MDuckworth83 2910 3/18/18
Efficiency is lost for flexibility if you want to use the card in response to staging. You’d need to hold off questing with a high willpower character to deal with a new threat, if the quest itself pulls enemies you can be ready otherwise you’d only be able to deal with enemies efficiently after leaving them up for a round. My group is struggling with the difficulty of the game right now so I don’t have the luxury of playing without the strongest cards unfortunately. — Covaxe 12 3/19/18