Response: After Galadhrim Healer enters play, choose a player. Heal 1 damage from each hero controlled by that player.

"Even if your Quest did not concern us closely, you should have refuge in this City, until you were healed and refreshed."
Celeborn, The Fellowship of the Ring
Magali Villeneuve 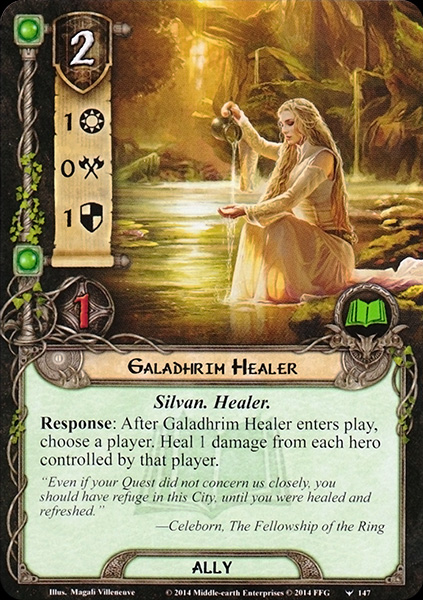 In the old Silvan archetype there was never a great need for the Galadhrim Healer. There were no reliable Silvan defenders that had the right combo of and hit points. Most Silvan heroes are too squishy to take undefended attacks as well. As a result, the only damage likely to be healed was that from treachery or archery. However, with the advent of Thranduil, a much more defined role for the Healer was carved out. Thranduil ensures that there will be a reliable source of damage that needs to be healed consistently.

However, the fact that the Galadhrim Healer heals one damage from each hero rather than several from just one can be seen as both a positive and a negative. On the downside, if we're talking about Thranduil, it might be more helpful if you could heal several damage on a single hero at once. Cards like Lembas will have a more efficient effect. On the bright side, this healing is repeatable. With cards like The Elvenking, you can defend with Thranduil, return the healer to hand to ready him for another attack. Then you can play the healer again the next turn and repeat the sequence. Another thing is that sometimes it can be good to have healing that can target multiple characters. Those treachery cards that deal damage become much less annoying. It can also target another player, so if your partner is really in trouble then you'll be able to provide some relief.

A final way to use the Galadhrim Healer is in accordance with ents heroes. Treebeard and Quickbeam both have abilities that require damage for statistical benefit. A Silvan/ent pairing, something like Treebeard, Quickbeam, and Thranduil, that can reliably trigger the healer might see some success. All in all the Galadhrim healer won't ever be a staple outside of a Silvan deck, but in the right builds it can hold its own and provide some much needed healing to the people of the woodland realm.

Swordthatwasbroke 594
Note that there are tank Galadriel builds, as well, using Ring of Barahir with Nenya, her Mirror, and assorted other Artifacts. So with Silvan Tracker, the Galadhrim healer can be the necessary healing engine to support an undefended attacks strategy. This gets bonkers if you are playing with ALeP cards like A Stout Heart. — kjeld 270 3/30/22
Scratch Silvan Tracker, unless you use Elf-Friend on Galadriel! — kjeld 270 3/30/22