"You will have to manage without pocket-handkerchiefs, and a good many other things, before you get to the journey's end. As for a hat, I have got a spare hood and cloak in my luggage." Dwalin, The Hobbit
David Kegg

Over Hill and Under Hill #12. Spirit. 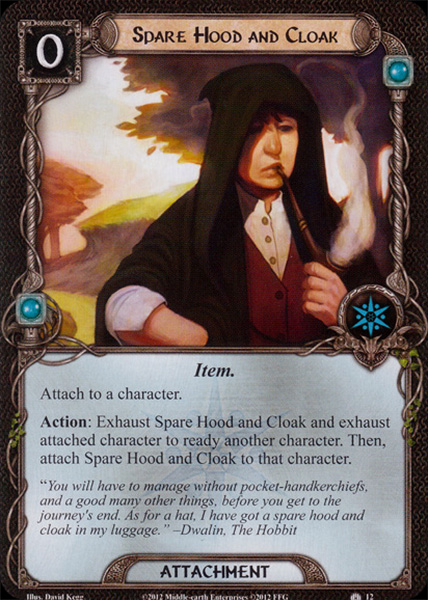 This card never used to be that great - it had a few fringe uses but was usually an early cut to make space in a deck. Now with the advent of Dale decks though, it’s great.

It’s a free item that lets you draw in a Dale deck when you put it on a character, which is good for a start. But put it on a North Realm Lookout and it shines. Then it’s giving you +2 and letting you quest without exhausting; even better, the North Realm Lookout can then ready a more combat-capable character in the combat phase (e.g. Redwater Sentry).

My favourite trick is to use this to ready Brand son of Bain so he can quest and attack for 3 in the same round, get an extra 1-cost discount for an ally in the next planning phase with King of Dale (so the next ally is probably free), and then return the Spare Hood and Cloak to the North Realm Lookout with Long Lake Trader so you can do it all again.

It’s really cool to see a card get rehabilitated from coaster status to awesome (in the right deck), and that’s definitely what’s happened with this one.