'The hasy stroke goes oft astray,' said Aragorn. 'We must press our Enemy, and no longer wait on him for the next move.'
The Return of the King
Lius Lasahido 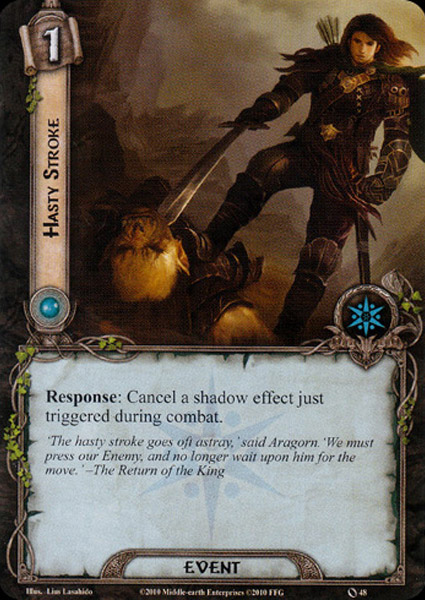 I don't use this card as often. I know its very powerful, but usually when it comes to deck size I'm putting this aside and choose different cards. I usually try to put together a deck which will survive any possible shadow, which can occur in the quest. But I have to admit it's good to have it. The artwork is weird a bit. It looks like it's stolen from Final Fantasy. It looks like manga art. Not bad but don't fit into this game much. Verdict: 4/5.

Hasty stroke is THE shadow cancellation card. Burning Brand, gandalf's staff, and staff of lebrethon attach to specific characters, the leadership options are to expensive or risky, shadows give way and tireless hunters are to situational, armored destrier and deorwine function only when they are defending, and sterner than steel requires a weapon or armor attachment. This just up and cancels any shadow effect. Boom.

Like A Test of Will, I'm not a huge fan of this card because I think it's unimaginative. Anything that just nullifies the encounter deck doesn't make for interesting player choices. Don't like a shadow effect - just pay 1 resource to cancel it!

I think it would be better if you then had to move the cancelled shadow card to the top of the encounter deck. That way it would force you to question whether you should cancel the effect: is the shadow effect worse than the encounter card itself? Is it better to let the shadow effect resolve and discard it or to cancel it and then reveal the card next turn?

Alternatively, it could force you to draw another shadow card. That way, the player had to decide whether to accept the shadow effect or potentially draw a worse one.

I know a lot of people will say that hasty stroke is not OP because it is a single use event and so you won't always have it when you need it but with all the recursive cards i.e. Dwarven Tomb, Will of the West, Map of Earnil (to fetch dwarven tomb), and now with event fetching via Spare Pipe it's generally not too far away when you need it.