Exhaust Mirror of Galadriel to search the top 10 cards of your deck for a card and add it to your hand. Shuffle the rest back into your deck. Then, discard a random card from your hand.

"What you will see, if you leave the Mirror free to work, I cannot tell. For it shows things that were, things that are, things that yet may be."
Galadriel, The Fellowship of the Ring
Jose Vega 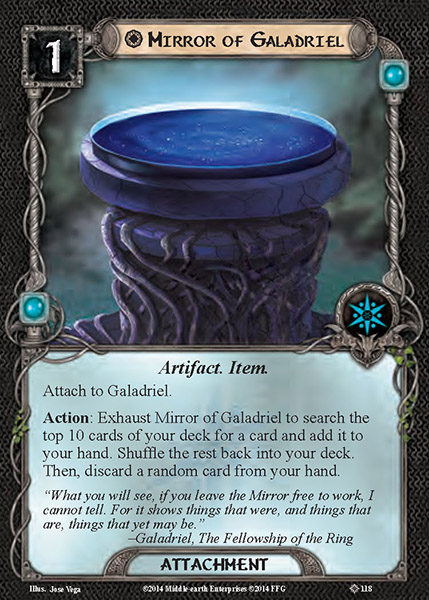 This is a fantastic card. There are a decent number of effects which let you search (some of) your deck for a card and add it to your hand - specifically they let you look at 5 cards, 10 cards, or your entire deck. However the majority of such effects, including all the full deck searches, are one shot effects rather than being repeatable like the Mirror. Most of them are also more limited, only allowing you to search for a certain type of card. And if they're not, they're likely more expensive. Let's make a few comparisons:

Meanwhile the Mirror searches 10 cards, is repeatable every round, and searches for anything you want. With advantages like that, it's little wonder they had to give it a downside in the subsequent random discard from hand. But that can be worked around in a few different ways:

The Mirror is certainly not essential if you're using Galadriel - she provides her own card draw already and there are plenty of other valid draw options. Plus, the random discard may be considered too big a risk for some decks which may want to hold particular cards for a while, waiting for the right time ( staple A Test of Will is of course the obvious example of such a card), and for any deck which is designed to play efficiently and consistently play everything in its hand the Mirror would most likely be useless for a majority of the game. But there is a wide selection of decks for which the Mirror can work perfectly, and it's an incredibly powerful effect. With or without a Silver Harp to negate the downside, repeatably searching the top 10 cards of your deck for any card you want offers a level of flexible power which is hard to overstate.