Flight of the Stormcaller #9. Lore. 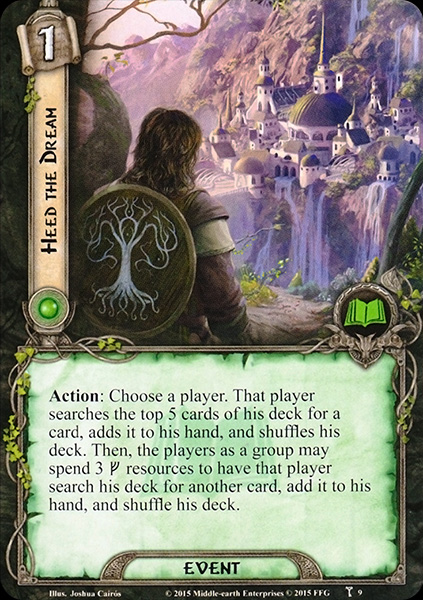 This fabulous card as now replaced Daeron's Runes and even Deep Knowledge for me. Even by using only the first ability of this card, it makes it one of the (if not THE) best drawing card in the game, with Elven-light.

And it's so fun to use, there's always a useful card to be found in your first 5 cards.

Lecitadin 184
In big fellowship with a resource generating Leadership deck it can be even more bonkers, letting any player grab two good cards, one of which can even be of those good &quot;Limit 1 per deck&quot; cards — Alonewolf87 1620 6/25/19
Awesome card and love the Boromir art too! — Christian_Medic 858 8/16/19
6

I love everything about this card. The functionality, the theme, the art, even the way that the 3 can come from Denethor on Turn 1, as though he is sending Boromir to Imladris to heed his dream. It inspired me to build a deck around it.

I have a question. Obviously, Gandalf can play Heed the Dream when it is the top card of the deck as Gandalf is considered to have the icon when doing so. However, when doing this, is Gandalf also considered to have the printed icon at the time that Heed the Dream's boost effect is resolving? If yes, then can 3 resources from Gandalf be used to trigger the second effect of this card?

My theory is that Gandalf can pay both the 1 and the 3 resources to resolve both parts of Heed the Dream, for two reasons:

Does anyone have any thoughts?

Heed the Dream is the best card advantage (draw/deck searching) card in the entire game. Here's why:

First off, I wish to make a claim; searching the top 5 cards of your deck for a card is better than drawing 2 or fewer cards provided that your deck is not composed of functionally similar cards (i.e.; Outlands, where once you get out an Anfalas Herdsman and an Ethir Swordsman you don't really care what allies you draw). If your deck has enough variation among its cards to where drawing one card over another makes a material difference, such as a deck running Spirit Glorfindel the First that wants to draw into Light of Valinor to avoid the material threat raise and exhaustion that the lack of Light of Valinor incurs, then the decrease in total cards added to hand is offset by the ability to choose what card would best help you in your current situation. If you're running an ally swarm deck that isn't reliant on the likes of Visionary Leadership or Steward of Gondor, then you're better off with straight-up card draw to provide you with a consistent stream of random cards, none of which are individually materially distinctive. If you're running a deck focused around a specific card or combination of cards, then you're better off with the extra potential to see a single specific card provided by deck searching.

Now that that's out of the way, let's look at Heed the Dream itself. At 1 resource in cost and with an effect providing card advantage, Heed the Dream competes directly against Mithrandir's Advice, forcing us to compare the two to decide which one to include in a specific deck.

In a mono- deck with at least 3 heroes, Mithrandir's Advice is the better option, allowing us to draw 60% of the cards we would've been able to search with Heed the Dream. Assuming we play it on the first turn, Heed the Dream's chances of finding us a specific 1-of in our deck become 12.21% as opposed to Mithrandir's Advice's 7.15%. This means that Heed the Dream has only a 5.06% of finding a card Mithrandir's Advice wouldn't have drawn us, making the question of inclusion, "Is a 5.06% chance of finding 1 specific card worth more to me than 2 other cards in my hand?" Unless you're running a deck where there is an absolutely critical card as a 1-of (which, unless the card has printed "Limit 1 per deck", is typically bad deck design), your answer is typically going to be 'no.'

In a deck with only 1 hero, Heed the Dream is the winner, hands down. It becomes a choice between searching 5 for 1 card and...simply drawing the top card of your deck. So, no choice at all.

So, while it's not Daeron's Runes (you can't beat free), Heed the Dream compares at least semi-favorably to Mithrandir's Advice, 's second main card draw staple, losing out to it only in a mono- deck and possibly in a two hero deck. It can target any player, too, giving it some additional value in multiplayer, but that doesn't justify my claim that it's the best card advantage card in the game. To justify that, we have to look at the next line of text.

The Dream-chaser cycle had a bit of a theme with some player cards in the form of the players (as a group, except for the oddly-differently worded Sam Gamgee) being able to spend resources to trigger additional effects. These cards are a mixed bag; Eldahir is niche, Ioreth is surprisingly good for a post-Warden healing card, Déorwine is powerful, and Knife-work is too clunky to make work.

Then, there's Heed the Dream.

After searching 5 for a card, the players (as a group, so a fellowship with and in it can make good use of this), can spend 3 resources to have the player who searched 5 search their entire deck for a card and add it to their hand. Spend 1 and 3 in exchange for 1 card from the top 5 of a player's deck and one card of their choice from the same deck, no matter how near the bottom it lies. There are no words to describe how powerful this is; spending those 3 resources when you play this can straight-up win games, either finding you the crucial attachment that was buried at the bottom of your deck or the exact card you need at the moment, and because and naturally go together like peanut butter and chocolate or Wargs and bouncing back to the staging area, it's quite easy to have both those spheres available. Yes, 3 resources is expensive, even for , but searching your entire deck for a card is worth it. It could cost 5 , and I'd still pay it every time because of how good it is. It could cost 100 U.S. dollars and, after a brief stint in a life of crime, I'd still pay it. The consistency this provides decks is simply too good to pass up.

Heed the Dream is quite possibly the best card to come out of the Dream-chaser cycle. It's usable without its second ability, and with it it's the single best card advantage card in the game, instantly fetching you whatever you need. Cheap (for the strength of its effect if you trigger the second ability), flexible, easy to use, Heed the Dream has it all. It even has good art! If you're trying to decide what card advantage to include in your deck, you can do worse than Heed the Dream, and if you're running a and deck and for some reason not including this you will find that you didn't heed the dream but you did stumble into a nightmare.