"It was commanded yesterday."
Denethor, The Return of the King
Empty Room Studios 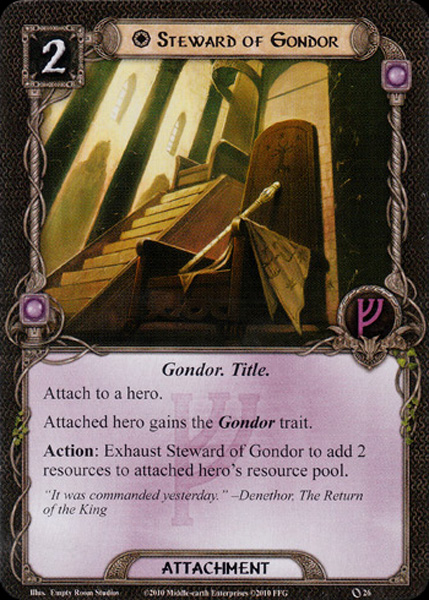 While A Test of Will is perhaps the most obvious candidate for a card which has seriously skewed card design as a result of its release and something so powerful would never be released today, Steward of Gondor is probably second, and tends to attract a lot more ire. Some people will still claim that the game would be better balanced if Steward were to receive an errata to nerf its power. Personally, while I do agree that Steward is not the best balanced card in the card pool by a wide margin, certainly wildly divergent from the more carefully balanced power of more recent cards, nerfing it at this point would not solve any balance problems. If we wanted to get rid of the balance concerns caused by the existence of Steward we would have to travel back in time to 2011 and prevent it being created in the first place, thus avoiding all the cards which since then have been designed accounting for the existence of Steward. And if we were to do that, I think I'd be more likely to do it for Test of Will for the reasons outlined in my review of that card. I suppose this point to differing perspectives, where many people are OK with defanging the encounter deck but object to feeling like their player deck power is too out of control, whereas I tend towards the opposite view - I suppose I mind more if the quest loses its challenge than if I am overly powerful.

The thing is, back in the earlier days of the game it was more difficult to manage without Steward, though still not impossible. Now, though, there's enough other good resource generation and enough good cheap cards that there are a fair few ways to be powerful without needing to use Steward at all. While it's a rarity, I have built decks which do not use Steward of Gondor, because if I consistently have all the resources I need then using up slots in my deck to get more resources and having nothing to spend them on will in fact decrease the efficiency of the deck. Admittedly even then I either will or probably should put it in the sideboard to play on other players' heroes in multiplayer, because Steward of Gondor is just that good.

Let's turn aside from any questions of balance for a second and address that. Steward of Gondor is amazingly good. If you want more resources than you know what to do with, this is the easy way to get them. Though of course as the card pool has expanded we have gotten more ways to make use of those excess resources, be it powering Blood of Númenor and Gondorian Fire, helping people Heed the Dream, drawing your deck out with Rod of the Steward, or maybe you just have some expensive cards and a powerful draw engine. While there are, as I've mentioned, other good forms of resource generation at this point, Steward is still the one which none of the others can ever quite live up to, the elder sibling in whose shadow the other such effects all permanently languish. It gives no tempo hit at all if you play it on a hero because you instantly recoup the cost. If played cross-sphere then it can get slightly more awkward, but you still have the same number of resources that you started with, spheres aside. Steward has incredible synergy with Blood and Fire, as mentioned, but it's also the simplest and easiest way to turn Elrohir into an untouchable wall of defence against all-comers (along with a Gondorian Shield of course).

One point which does tend to slightly bug me about Steward is that if you're building a deck which needs to be able to play expensive cards in a non- sphere, you can afford them more easily by splashing for Steward than by going mono-sphere, and this seems wrong given that one of the reasons to go mono-sphere is to not have resource issues. Of course you could go mono-sphere and just play Steward with A Good Harvest, but some may find this to be one too many hoops to jump through, and unless you're getting something else in particular out of being mono-sphere, it may well still not be as efficient, especially since now splashing for Steward has never been easier - run Denethor, he can play Steward with his 2 starting resources and then give the rest away. You don't even need to put in any other cards and the efficiency of your deck will be unaffected.

Returning to balance and design questions, it certainly may be viewed as a problem that Steward is probably the most hotly contested uniqueness clash in the game, but so long as things can be solved amicably and everyone has fun, it shouldn't be that big a deal. It may be viewed as a problem that it's so much of an auto-include, but Test of Will is still auto-includier to my mind, Feint is on a similar level, and so is Daeron's Runes, among others, so if that is a problem, it's far from being a unique one. It's certainly a thematic oddity that any hero in the game can become the Steward of Gondor, from Denethor himself to Elrond, Theoden, Galadriel, Grima, Treebeard, Pippin... and one could certainly argue that perhaps the generic resource generation card should have been named something else, something more generic, but personally it doesn't bother me overly that it wasn't.

In the end, Steward of Gondor is certainly a contentious card, both in that it may be fought over in multiplayer games and in that out of games people will argue for ages about how it's unbalanced, unthematic, almost like cheating, etc. Both can get rather heated. But personally, I suppose I fall somewhere in the middle on a balanced view. Yes, Steward is questionably balanced, but it's too late to change it now (and I find it very hard to imagine they ever would errata it). Yes, I use it sometimes, and I don't feel like it's overly trivialising the game, nor do I care about the thematic weirdnesses. Conversely when I play without it I don't feel like it's some great accomplishment. When it comes down to it, this is a co-op game often played solo, and you can do whatever you like, just have fun with it. Accept that Steward of Gondor is and almost certainly always will be the most potent form of single target resource generation in the game, and deal with it however makes sense to you.

The gold standard in resource acceleration, Steward of Gondor starts paying dividends the turn after you play it. It also grants the Gondor trait for additional synergy with Blood of Númenor and Gondorian Fire.

Kakita_Shiro 40
Sometimes I think this card is too strong. It can really change game balance once it hits the table. — Sydtrack 24 3/30/16
It may be too powerful but in multiplayer games (especially 3-4) I think it's perfect. For one, not every player can use it. Secondly, the resource generation is certainly overpowered but with more players the encounter deck can easily match the power level of the deck running this card (at least in most of my experiences). — SecondhandTook 533 3/30/16
I've always been of the opinion that this is one of the most poorly designed cards in the game, even in the days of the core set only. Since it can immediately replace the 2 resources it costs, it's already overpowered... but when you add that it grants the Gondor trait, it becomes bonkers. It would have been a much better design if it *required* the Gondor trait rather than give it. — MDuckworth83 3127 3/31/16
Hmm..this card was never balanced? — DundyO 1 5/7/16
I feel that an easy, quick errata would be for it to enter play exhausted. Then you're not really playing it for free. — sputang 1 7/28/16
8

Atleast constraining it's overpowered effect to the Gondor trait makes it far more restrictive and thematic.

MDuckworth83 3127
That's about how I see it. If it's constrained to Gondor, it's more thematic and less pervasive. As it is, it's basically the only thing that can offer this kind of resource acceleration, so you basically need to include it in a leadership deck, as I feel that the sphere is balanced around having access to it. And it's so annoying to throw in 2 or 3 of them in every single deck with access to Leadership. And on top of that, I've included it in decks specifically for gaining the Gondor trait (where, of course, the resource gain is never unwelcome). It's just ridiculous. And being so thematically is just salt in the wound. — estyles 19 9/23/16
&quot;so thematically *off*&quot; I meant to say. I don't see an edit option. — estyles 19 9/23/16
How about just not playing cards you don't like instead of wishing an errata? — Lecitadin 184 9/26/16
Hi, does I have to exhaust the hero attached to this card, or just to exhaust the attachment card? — cibermano 1 2/2/18
7

I refuse to play this card. No, I don't wish for it to be nerfed--there are too many people who like it. And why wouldn't they? It's OPAF. It's a rare misstep in an otherwise fantastic and (fairly) well balanced game. But no, I just won't use it myself. It is certainly way too powerful, but that's not the main reason. The main reason is theme. It's just goofy. Yay, Treebeard is now the Steward of Gondor and gets the Gondor trait! What, what?? No, I just can't bring myself to do it, with one exception: I'm playing Denethor. Then I will play it, but only because he is, in fact, the Steward of Gondor.

Mad Morderan 116
I sometimes house rule that the attached hero must be a noble. — Wandalf the Gizzard 1989 5/4/18
I like that! — Mad Morderan 116 5/4/18
I've heard about the houserule that Steward requires the Gondor trait instead of giving it. — TheNameWasTaken 7 5/5/18
This card should have required the Gondor trait and given its bearer the leadership sphere instead. Then there would have been a useful and thematic reason to choose to put it on Denethor. Well, now there is a leadership Denethor anyway. But it would have been ideal for core set Denethor. In the core set alone, it would have given him access to his son Faramir, not to mention For Gondor. — Ear-a-corn 1 5/6/18
Nice names, by the way, The Name was Taken and Ear a corn! — Wandalf the Gizzard 1989 5/6/18
1

If only the attachment card, Steward of Gondor, independently exhausts to add 2 resources to the attached hero's resource pool, I can see how this is extremely powerful. However, if the "title" keyword indicates that the title "Steward of Gondor" is conferred upon the attached hero, then that means the hero itself must exhaust to receive the 2 resources, rendering it quite a bit less powerful. Which is the correct interpretation?

Drazulfel 2
No, only the attachment exhausts. It's as strong (broken?) as it sounds. — Mythik 141 12/25/22
&quot;Title&quot; is a trait associated with the attachment itself, similar to how some attachments are &quot;Weapons&quot;, which matters for cards like Foe-hammer or Open the Armory. — kjeld 462 12/25/22
1

Another of the must have cards, which I think is really good, but lately I'm trying to reduce her presence in deck to one only. To make it little more harder, but still. resources are always good. Very fine artwork. Verdict: 5/5.