Attach to a Gondor or Dúnedain hero. 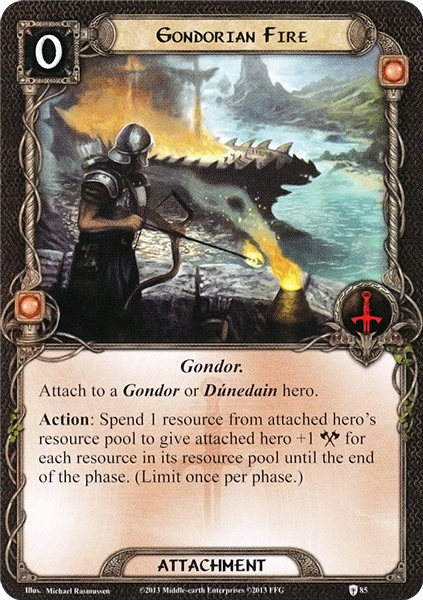 This card, alongside Blood of Númenor, has become especially interesting for decks using the new The Grey Wanderer contract, as you don't need a resource match for the first card you play each planning phase, and these one hero decks have the advantage of secrecy. Thus, they can use Resourceful to its fullest extent, which means that, with some preparation, they end up with dozens of resources und thus the ability to take out even a Balrog in a single round thanks to the contract's readying ability. I have had great success using Gondorian Fire and Blood of Númenor in a Beravor deck with The Grey Wanderer, using her card draw to get both of these cards and all three (or at least two) copies of Resourceful on her at an early point, so that she could easily kill every enemy in the game, The low starting threat of a single hero also allows those extra rounds of preparation. The trait restriction isn't too bad, either, since Ranger characters in general and Dúnedain in especial all are a natural fit for this contract, as they have balanced stats and are exactly the jack-of-all-trades this contract requires. Gondorian fire then can boost up their attack value to a ridiculous amount (I have already killed the Eastern Crows with some 50+ attack). As long as I play The Grey Wanderer with a Gondor or Dúnedain hero, this along with Blood of Númenor and Resourceful is an auto-include in every deck.