Action: Name a sphere. Until the end of the phase, you can spend resources of any sphere when paying for cards that belong to the named sphere.

The townlands were rich, with wide tilth and many orchards, and homesteads there were with oast and garner, fold and byre, and many rills rippling through the green from the highlands down to the Anduin. The Return of the King
Trudi Castle 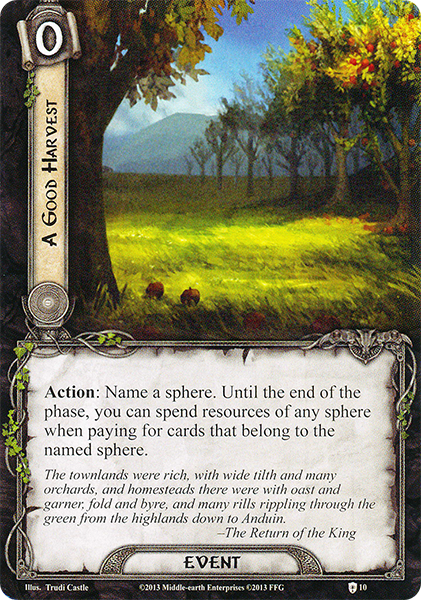 This card is surprisingly good. I consider it a staple, and have to justify not including it in any of my decks. A Good Harvest + Steward of Gondor changes the whole meta in terms of what decks can be functional. There are many other uses as well, which I still haven't even begun to explore. This is a deckbuilder's dream card.

Seastan 34318
I totally agree with you on this card's amazingness. Steward of Gondor belongs in every deck, and this card puts it there! — jodudeit 24 3/30/16
You're the one who made me realize it's potential. It solves the problem of 'having' to include a certain sphere'd hero for a certain card. Having Steward in non-leadership is great, fast hitch in non-lore hobbits is great, it could be great in saga quests to make use of extra baggins/fellowship resources, etc. — ransomman 207 4/16/16
5

This is a card which for a long time I dismissed, but which more recently became one of my favourite cards from the Against the Shadow cycle. My initial thought on it was that maybe it'd fit into a tri-sphere deck to smooth out the resources, but I generally found my tri-sphere decks got by fine by just not running expensive cards and with three spheres to choose from I always had just so many other things I wanted to put in which would actually do things. And that is the first important thing to note about A Good Harvest - it's not for every deck, because by itself, it is a card which does nothing. Its only purpose is to make it easier/possible for you to play other cards. As such it's only good if you have it and the other cards you want to be playing at the same time, and thus you want to use it only in decks with good enough card draw to ensure that happens. Even in a deck well-designed to work with it there may be times when it'll just be a dead draw. With that said, when it's in the right deck it's incredibly good. So let's examine this for a moment. For what is it good?

Well firstly it can let you play cards for which you don't have a sphere match (so long as they don't cost 0). The big one of these, popularised by Seastan, which really brought Good Harvest into the spotlight, is the ability to put Steward of Gondor into a deck without native access to the sphere. This is mostly a solo trick though, since in multiplayer it probably makes more sense for Steward to be played by someone who does have native access. On the other hand there are a few other out-of-sphere cards which it can be very nice to splash in - Unexpected Courage can be a very significant one for certain heroes who really want multiple actions; perhaps something to shore up defensive needs like Honour Guard or Derndingle Warrior in decks without ; Sword that was Broken for Aragorn or Aragorn; Asfaloth for Glorfindel without needing , and so on. Some decks may include out-of-sphere cards for other reasons, especially allies, expecting to bring them in with effects like Stand and Fight, Herald of Anórien, Elrond, Vilya, A Very Good Tale and so on, and here Good Harvest offers an alternative so those out-of-sphere cards don't end up just clogging up your hand. Finally, in saga quests, Good Harvest can helpfully allow you to play cards while the saga hero is elsewhere on the table (note however that Good Harvest only applies to playing cards, so while it can let you play Frodo's Intuition or Fellowship of the Ring whenever you like, you can't use it to trigger any of the saga heroes abilities which require spending resources, or any quest-specific effects which require spending resources).

All that was firstly. Secondly, there's also the use which seemed more obvious, that of smoothing out resources between spheres you actually have in your deck. Now this use was easier to spot and for a long time I dismissed it, which just goes to show how you can't really judge a card until you've tried it, because once I started using Good Harvest for this I found it incredibly useful. My initial thought of tri-sphere actually may be less of a good fit for the reasons I mentioned above, though it can certainly work, especially if you have some resource generation floating around the place - I'm sure many of you have had the experience where you put Steward onto a hero, play a bunch of cards of their sphere, then run out and find yourself just stacking pointless resources on them while you draw everything for other spheres. Good Harvest lets you splurge those stacked resources on whatever other sphere you want for a round. And in certain dual sphere decks I've found Good Harvest to be very useful as well. Because there are always those times that you're just drawing everything from your minor sphere and next to nothing from your major and you can't play it all with the one resource per round that matches. Likewise just at the initial deckbuilding you sometimes get those situations where there are cards you really want, but they're a bit expensive for having only one hero in the right sphere. In which case you could accept that you can't have them, or you could put in Good Harvest to let you effectively transfer resources over to that minor sphere once again. It doesn't have the reusability of the Song attachments, but conversely it doesn't cost anything and it's more flexible, allowing you to swap resource spheres whichever way you need to at a given moment based on what's in your hand at the time. All in all just an incredibly useful card once you give it a chance.

Warden of Arnor 4987
is — BrnLmx 23 9/3/21
I am quite surprised when I read comments like &quot;we can finally play Stewart of Gondor and/or Unexpected courage without a leadership and/or spirit hero!&quot;. This was possible already after the first cycle, thanks to the songs. The real novelty brought by this card is that it allows to play *expensive* cards without the matching hero(s). If your goal is just to play a 2-cost card, a song accomplish more or less the same role... — BrnLmx 23 9/3/21
2

Q: Can I use A Good Harvest (AtS 10) to play a 0 cost card without a resource match?

A: No. A Good Harvest only allows you to spend resources for the named sphere, a resource match is still needed to play cards with no resource cost.

Now that we have that important bit out of the way, let me just say that A Good Harvest is amazing! It allows you to do 2 things: 1) play off sphere cards (e.g. put Steward of Gondor on a hero using any resources in play) and 2) smooth resources in multi-sphere decks (e.g. spend excess resources to pay for your hand full of cards)

Tri-sphere decks everywhere got a lot more interesting when this card was released.

A Good Harvest is not just good, it's great!