Sword that was Broken

If attached hero is Aragorn, each character you control gets +1 .

"For the Sword that was Broken is the Sword of Elendil that broke beneath him when he fell."
Aragorn, The Fellowship of the Ring
Sara Biddle

The Watcher in the Water #55. Leadership. 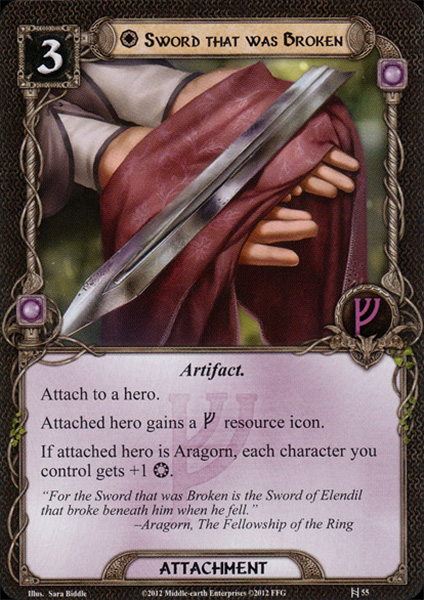 The Sword that was Broken is arguably a misnomer, in that it could be coherently argued this card still is broken. Global boosts are just insanely powerful.

Let's briefly cover the more minor aspects of this card. It has the Artifact trait, giving it synergy with the Ring of Barahir, but 3 resources for one extra hit point is not a good deal if that's all you're getting. This card is weird compared to Aragorn's other staple attachments in that it offers a resource icon as the standard effect while the more powerful and generally useful effect is the part which only applies if the card is attached to Aragorn, which is the opposite of how Celebrían's Stone, Ring of Barahir and Roheryn work. Functionally this serves to make the card useless on any other hero, because it's then a triple cost Song of Kings which you can only play if you already have access. They may as well have just made it read "Attach to Aragorn." It would've come to the same thing in practical terms and been more honest. Now from a balance perspective it could certainly be argued that allowing any hero at all to give +1 to all characters they control would be too powerful, but then restricting it to only one hero doesn't make it any better balanced, it just means the power imbalance is applied to that specific hero (or rather those specific heroes, Aragorn being the most-recreated hero in the game).

So let's for the moment set aside concerns about the balance of the game and simply consider how good this card is. Now technically I mis-spoke at the start, this is not a global boost. It doesn't apply to the whole table, only to characters you control. It is in that respect less flexible than Faramir, who can be targeted on any player in the game and doesn't have to be used if you're wanting to be more precise about your questing. The latter case is rare though and as for the former you build around it by including a lot of questing characters in your deck, plus the Sword costs one less resource than Faramir. In only working on your characters it also does less than actual global boosts Dain Ironfoot and Visionary Leadership - but unlike those two it has no stipulation about the traits of the characters being boosted nor any other condition for the boost being active. Aragorn doesn't need to stay ready or hold on to a spare resource, and he can boost the willpower of any hero or ally in the game, leaving you free to choose whichever you like based on their utility rather than just grabbing everything with a certain trait. While Gondor or Dwarf decks may be pushed towards allies who don't necessarily synergise with the other functionality of the deck, Aragorn with the Sword can just as easily boost Galadriel's Handmaiden, Grimbold, Sarn Ford Sentry, Galadriel, or whoever else may fit in with your deck's strategy.

Having just mentioned ally Galadriel, I shoul point out that she goes nicely with the Sword, having the same cost and being able to pull the Sword out of your top 5 cards and put it into play. Often the Sword that was Broken is used in a deck which intends to give Aragorn all his toys, plus others (e.g. Steward of Gondor) so the chances of you finding a good target for Galadriel tend to be rather high. Alternatively, while it's obviously not as resource efficient, a very reliable means of getting the Sword out is of course the erstwhile Master of the Forge.

Talking of giving Aragorn all the toys, is the most important sphere for that as it contains three out of four of the Aragorn attachments, plus Steward of Gondor which is useful for playing all these things, and getting more resources on the hero who potentially ends up with all four resource icons just makes sense. This to me is the biggest appeal of Aragorn at this point, where in other respects I find I prefer the or versions. Aragorn may be a worse fit for the Sword as he's much more of a focused combat hero, but Aragorn is great for it. In either case though, you definitely want to be starting from already having access on probably both of your other heroes, and the Sword can be the most significant of the attachments for giving Aragorn the icon to pay for the others as well as the fact it has the most powerful benefit of all of them.

I don't think we'll ever see a card like Sword that was Broken again. Well, I suppose we did get Banner of Elendil, but that's only usable in the Saga quests. The designers have generally moved away from these kinds of static global (or whatever you want to call this, player-global maybe) boosts, and for good reason as they can have a significant unbalancing effect on the game. I also would not expect us now to see a card with the wonky distribution of effects the Sword has where it can be attached to other heroes but is basically useless on them. Honestly that's a design error which my mind boggles at the fact it happened even once since the problem seems so obvious. Regardless, the Sword that was Broken is somewhat of a relic of past times in game design terms as well as thematic ones, harking back to a past age of greater power. If you're building a deck which uses any version of Aragorn, contributes to questing, and has access, then the only reason not to use the Sword that was Broken is if you have compunctions about its impact on the balance of the game. It's just that good.