Refresh Action: Reduce your threat to your starting threat level. (Limit once per game.)

"I am older than I look, I might prove useful."
The Fellowship of the Ring
Tony Foti 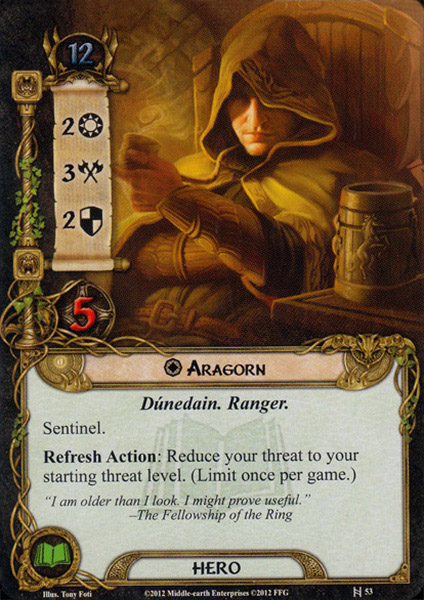 Aragorn is one of the most fundamentally powerful heroes in the game. The ability to pretty much make threat a non-issue is bonkers, especially when you throw Desperate Alliance in the mix (this will also prevent your friends from shredding you when you play Deep Knowledge). Aragorn here is a good quester if you can get Sword that was Broken or Celebrian's Stone on him. He's a two/five sentinel defender with natural access to Burning Brand. He's even a good attacker. Or you can go the triple Unexpected Courage route with all of his toys and turn Aragorn into a one-man Last Alliance.

What a fantastic toolbox hero! He completely solves the problem of threat, which was honestly a big problem for new players in the earlier cycles the game, since there were so few solutions. Take Return too Mirkwood for example, a early quest where threat is a HUGE problem, especially solo. Well, Aragorn solves that, easy. So when The Watcher in the Water was released, I think a lot of people got really exited over this version of Aragorn, and for good reason. But what is his role now, in more modern lotr lcg decks?

Well, let's talk about his ability. It's threat reduction in , which is very good, since there are few other options in (Woodmen's Clearing comes to mind). But his threat reduction works differently than normal threat reducters. Aragorn's ability depends on how high your threat started to begin with. For example. if you are playing a deck with a high starting threat (and keep in mind, he is a 12 threat cost hero), you won't really be lowering your threat to a "Safe" level, because you weren't "safe" to begin with. Enemies will still engage you, bad things could happen, etc. So in that case, you have to treat his ability as a last ditch safety button--sort of like Favor of the Valar. Yes, you could pick a low threat cost hero line up, and use him to stay low and avoid enemies for most of the game, but then wouldn't you just pick another hero with a lower threat cost?

However, as for the hero himself, the combos are endless: Sword that was Broken, Celebrían's Stone, Ring of Barahir, a burning brand or Armored Destrier to defend attacks, your choice of weapon, and provided readying with Steed of the North. Sadly, he only has the Dunedain and Ranger traits, unlike his other three versions, which all have three traits (noble/warrior/scout), so there are some limits to the combos you can use, but no matter. basically, he can do anything, which is the definition of a glue hero. Also, he can share the wealth with Desperate Alliance, to lower everyone's threat!

In my opinion, Aragorn find a great place in two archetypes: Doomed, and Valor. We all know the classic shenanigan of using Helm of Secrecy to swap out Saruman for Aragorn, to stay alive longer if you're running a doomed deck. Valor could work very well too: pick a lineup of hero with high staring threat to get to 40 quickly (or just use Pillars of the Kings, but whatever works) and use his refresh ability when things get too high. Perfect. I think the one archetype that Aragorn does not being in is the one he was probably intended for: secrecy. While his ability would be great for staying at 20 of below, his own starting threat of 12 is just to darn high, unless you're running a MotK hero with really low threat. Still, he is such a good hero, and dang, that artwork is so good, that I think he still holds a place amidst the more modern heroes. The only reason he sees a bit less use is that his other versions are so popular too!