Pillars of the Kings

"Behold the Argonath, the Pillars of the Kings!"
-Aragorn, The Fellowship of the Ring
Sam White 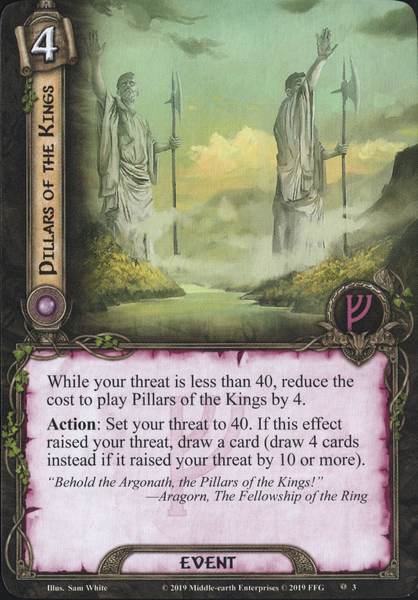 Am I thinking correctly that this card functions the same way The Galadhrim’s Greeting does? At first, I was only focused to make it work as an engine for drawing tons of cards, but now I realized that it can actually keep you in Valour mode for a very long period of time. It can reduce your threat by 9, which is pretty awesome for mono leadership decks.

Rimogard 235
Also, since it says &quot;set&quot; your threat, it doesn't specifically reduce it like The Galadhrim's Greeting, making it incredibly overpowered in quests with the Dire keyword. — AlasForCeleborn 351 6/10/20
@AlasForCeleborn, are you certain? Going 30--&gt;40 counts as &quot;raised&quot;, so it seems that going 49--&gt;40 should be &quot;reduced&quot;. — ellipticaltable 155 6/10/20
What I wanted to say is that it basically allows mono leadership decks to reduce their threat instead of using overused conbos such as Sneak Attack &amp; Gandalf. I’m not sure about the wording and how it will affect certain quests. — Rimogard 235 6/10/20
That’s quite interesting though, it makes the card even better. I’m almost 100% sure that setting your threat to a certain level is different than reducing/increasing your threat. — Rimogard 235 6/10/20
Caleb clarified that &quot;reducing your threat&quot; includes all instances where your threat level goes down in number, no matter which verb is used &quot;set&quot;, &quot;reduce&quot;, &quot;lower&quot; and so forth. So using this card in a Saruman deck with 45 threat would only bring you down to 44 due to Saruman's effect — Alonewolf87 1083 6/11/20
Nice catch, thanks for the clarification. — Rimogard 235 6/11/20